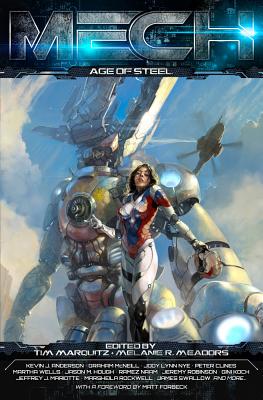 MECH: Age of Steel is a collection of 24 mecha-inspired short stories in the spirit of Pacific Rim, Macross, Transformers, Robotech, Gundam, Evangelion, and more.

The MECH: Age of Steel anthology features a vast array of tales showcasing giant human-piloted, robot war machines wreaking havoc in blasted cities, or on dystopian landscapes, or around space stations and asteroids against a cosmic backdrop, and more!

MECH is anchored by authors such as:

This anthology also features illustrations for every story and is the perfect companion to its sister title, Kaiju Rising: Age of Monsters. So strap in. Activate your interface array. And let's rock!

Tim Marquitz is the author of the Demon Squad series, the Blood War Trilogy, co-author of the Dead West series, as well as several standalone books, and numerous anthology appearances, including Triumph Over Tragedy, Corrupts Absolutely?, That Hoodoo Voodoo that You Do, Widowmakers, At Hell’s Gates 1&3, Neverland's Library, Blackguards, SNAFU Survival of the Fittest, Future Warfare, and Hunters (Cohesion Press), In the Shadow of the Towers (Night Shade), and Unbound (Grim Oak Press). Tim also collaborated on Memoirs of a MACHINE, the story of MMA pioneer John Machine Lober and was lead editor on Kaiju Rising: Age of Monsters as well as the forthcoming follow-up Mech: Age of Steel.
or
Not Currently Available for Direct Purchase
Copyright © 2020 American Booksellers Association