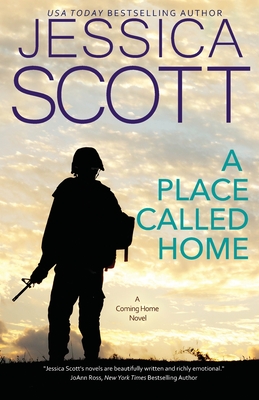 "Scott displays a deft touch with her main and supporting characters, and a realistic, moving development of Reza and Emily's romance. Readers will ache, cheer, and worry in all the right places." Publishers Weekly (starred review)

Welcome home to the great place, the home of America's Army, where the men are strong and the women are tough enough to love them.

There's no crying in war. That's what Reza Iaconelli believes with everything that he is - because its the only thing in his life that he's been able to control. Running from the demons of his past, he's given the his men everything, hiding the worry and fear beneath a gruff exterior. Nothing will stand in the way of him taking care of his men -- especially not some direct commission head doc who can barely put on her uniform. He has no idea what she's even doing in the Army, other than getting under his skin.

Emily may not know much about the Army but she knows that it's terrible at taking care of soldiers. Running from a past that never accepted her, she's looking for a place to belong. Emily isn't fooled by Reza's rough, angry exterior. Beneath the hard edges, she sees a man who's hiding -- using war as a means to escape the demons from his past.

When they collide over one of his soldiers, Reza faces his toughest challenge yet. As his efforts to remain sober start to fail, he'll need to find the strength to do the one thing he's never asked anyone: ask for help. And it may be more than he's capable of.

"Scott delivers another sensitive, touching look at the trials and tribulations of modern military life at Fort Hood, Texas... tackling military suicides and the macho culture that contributes to them." Publishers Weekly (starred review)

PRAISE FOR A PLACE CALLED HOME (PREVIOUSLY PUBLISHED AS ALL FOR YOU):

"Top Pick Review This is another excellent addition to the emotional and heartfelt stories that comprise this series and I look forward to reading even more by this wonderfully talented author who has allowed us to get a brief glance into a world that is often very foreign to those of us who benefit from the sacrifices made by so many brave individuals." Night Owl Romance (Top Pick review)

"ALL FOR YOU is the latest in the Coming Home series, giving fans something to really sink their teeth into. Delving into the subject of how a war-torn soldier adjusts to life after battle really pulls on the heartstrings. Scott is a master at creating characters who are made for one another." RT Book Reviews