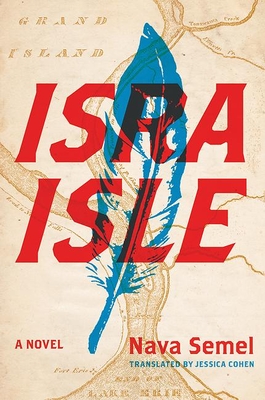 This novel is inspired by a true historical event. Before Theodore Herzl there was Mordecai Manuel Noah, an American journalist, diplomat, playwright, and visionary. In September 1825 he bought Grand Island, downriver from Niagara Falls, from the local Native Americans as a place of refuge for the Jewish people and called it "Ararat." But no Jews came. What if they had followed Noah's call? In Nava Semel's alternate history Jews from throughout the world flee persecution and come to Ararat. Isra Isle becomes the smallest state in the US. Israel does not exist, and there was no Holocaust. In exploring this what-if scenario, Semel stimulates new thinking about memory, Jewish/Israeli identity, attitudes toward minorities, women in top political positions, and the place of cultural heritage. The novel is divided into three parts. Part 1, a detective story, opens in September 2001 when Liam Emanuel, an Israeli descendant of Noah, learns about and inherits this island. He leaves Israel intending to reclaim this "Promised Land" in America. Shortly after he arrives in America Liam disappears. Simon T. Lenox, a Native American police investigator, tries to recover Israel's "missing son." Part 2 flashes back to the time and events surrounding Mordecai Noah's purchase of the island from the local Native Americans. Part 3 poses an alternate history: the rise of a successful modern Jewish city-state, Isra Isle, on the northern New York and Canadian border--a metropolis that looks remarkably like New York City both before and after 9/11--in which the Jewish female governor campaigns to become president of the United States. Nava Semel has published novels, short stories, poetry, plays, children's books, and a number of TV scripts. Her books have been translated and published in many countries. Her book, Becoming Gershona, received the 1990 National Jewish Book Award in the US.

Nava Semel has published novels, short stories, poetry, plays, children's books, and a number of TV scripts. Her stories have been adapted for radio, film, TV, and stage in Israel, Europe, and the United States. Her books have been translated and published in many countries. Her novel And the Rat Laughed was adapted into a successful opera, and it is also being made into a feature film, directed by David Fisher. Semel is on the board of governors of the Yad Vashem Holocaust Museum. Her book Becoming Gershona received the 1990 National Jewish Book Award in the U.S. She has received many other literary prizes including the Women Writers of the Mediterranean Award (1994) and the Prime Minister's Prize (1996). Jessica Cohen, translator, has worked with some of Israel's finest writers, including David Grossman, Etgar Keret, Assaf Gavron, Rutu Modan, Amir Gutfreund, Yael Hedaya, Ronit Matalon, and Tom Segev, as well as such prominent screenwriters as Ari Folman and Ron Leshem. She has served as a board member of the American Literary Translators Association, and is also a member of the American Translators Association, the Israel Translators Association, the Colorado Translators Association, and PEN American Center.
Loading...
or
Not Currently Available for Direct Purchase