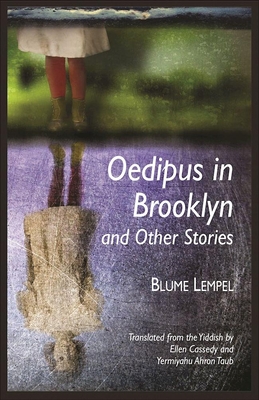 Oedipus in Brooklyn and Other Stories

Ellen Cassedy and Yermiyahu Ahron Taub (the translators) on encountering Blume Lempel's stories wrote: When we began reading and translating, we didn't know we were going to find a mother drawn into an incestuous relationship with her blind son. We didn't know we'd meet a young woman lying on the table at an abortion clinic. We didn't know we'd meet a middle-aged woman full of erotic imaginings as she readies herself for a blind date. Buried in this forgotten Yiddish-language material, we found modernist stories and modernist story-telling techniques - imagine reading Gabriel Garcia Marquez with the conversational touch of Grace Paley. Lempel (1907-1999) was one of a small number of writers in the United States who wrote in Yiddish into the 1990s. Though many of her stories opened a window on the Old World and the Holocaust, she did not confine herself to these landscapes or themes. She often wrote about the margins of society, and about subjects considered untouchable. her prize-winning fiction is remarkable for its psychological acuity, its unflinching examination of erotic themes and gender relations, and its technical virtuosity. Mirroring the dislocation of mostly women protagonists, her stories move between present and past, Old World and New, dream and reality. While many of her stories opened a window on the Old World and the Holocaust, she also wrote about the margins of society, about subjects considered untouchable, among them abortion, prostitution, women's erotic imaginings, and even incest. She illuminated the inner lives of her characters--mostly women. Her storylines migrate between past and present, Old World and New, dream and reality, modern-day New York and prewar Poland, bedtime story and passionate romance, and old-age dementia and girlhood dreams. Immigrating to New York when Hitler rose to power, Blume Lempel began publishing her short stories in 1945. By the 1970s her work had become known throughout the Yiddish literary world. When she died in 1999, the Yiddish paper Forverts wrote: Yiddish literature has lost one of its most remarkable women writers. Ellen Cassedy, translator, is author of the award-winning study We Are Here, about the Lithuanian Holocaust. With her colleague Yermiyahu Ahron Taub, they received the Yiddish Book Center 2012 Translation Prize for translating Blume Lempel. Yermiyahu Ahron Taub is the author of several books of poetry, including Prayers of a Heretic/Tfiles fun an apikoyres (2013), Uncle Feygele(2011), and What Stillness Illuminated/Vos shtilkayt hot baloykhtn (2008).

Blume Lempel: Born in Galicia in 1909, with the rise of Nazism, Lempel emigrated to New York in 1939. Although writing in Yiddish, the settings of her short stories were largely American. She continued to write and publish well into her 90s.Until now her work has remained mostly uncollected and untranslated.Ellen Cassedy: A former columnist for the Philadelphia Daily News, a former speechwriter in the Clinton Administration, Ellen is the author of "We are Here: Memories of the Lithuanian Holocaust. Her work has appeared in Hadassah, The Jewish Daily Forward, the Huffington Post, Lilith, and many other fine journals.Yermiyahu Ahron Taub: Born and raised in Philadelphia and Baltimore, Taub graduated Phi Beta Kappa and summa cum laude from Temple University. He received an M.A. in history from Emory University and an M.L.S. from Queens College, CUNY.The author of four books of poetry, he was honored as one of NYC's best Jewish artists.
Loading...
or support indie stores by buying on