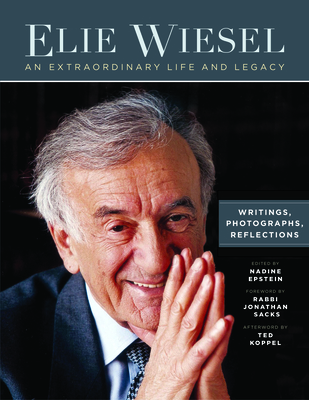 Elie Wiesel (1928-2016) is best known as the author of Night, survivor of Auschwitz and a powerful, enduring voice of the Holocaust. A recipient of the Nobel Peace Prize and the Presidential Medal of Freedom, he was a hero of human rights, professor and author of more than 50 books. Among his accomplishments, Wiesel co-founded Moment Magazine with Leonard Fein in 1975 to be a place of conversation for America's Jews. For editor-in-chief Nadine Epstein, he became a mentor and friend after she took over the magazine in 2004. In this striking volume, Epstein shares her memories of Wiesel and brings together 36 interviews with friends, colleagues and others who knew him - including, his son Elisha, Michael Berenbaum, Wolf Blitzer, Father Patrick Debois, Ronald S. Lauder, Bernard Henri-Levi, Kati Marton, Natan Sharansky, Ben Kingsley, and Oprah Winfrey. The foreword is by British Rabbi Jonathan Sacks and the afterword is by broadcaster Ted Koppel. To celebrate this humanitarian and keep his inspiration alive, Epstein presents readers with a visual history of Wiesel's life and examines the influence of Night. This chilling story of the Holocaust has already gripped the souls of millions of readers. Epstein includes a selection of his speeches and writings, lively conversations with teenagers about Night and discussion questions. The book features more than 100 photos. Says Rabbi Jonathan Sacks: "This book of reflections is a fitting tribute to the legacy of Elie Wiesel. In its pages and through the words of its contributors, you will feel a promise, not just to the souls who perished, but also to Elie and all those who survived Europe's darkest night."

"It is absolutely imperative for this legacy of Elie Wiesel's to continue. It has to, and if it doesn't, it is our loss, and it will be an unfathomable loss." ―Ben Kingsley

"Wiesel taught us that we must not forget; that there is no greater sin than that of silence and indifference. In doing so he has not just illumined the past, he has illumined the future" ―Oprah Winfrey

"There was something burning inside of Elie, a flame ignited by injustice and pain. He was willing to share that part of himself. Pain can make people retreat from life, but opened Elie to the world." ―Kathleen Kennedy Townsend

"He performed the alchemy of converting pain, injustice and horror into love, compassion and tolerance. We remember him not so much because he so often succeeded but because he never stopped trying." ―Ted Koppel

"I believe there is a risk of Elie Wiesel, the Holocaust, and other genocides being forgotten. Without a real effort to retain their memory, they may simply disappear from history. Elie Wiesel was a light in the night for the whole world, not just the Jewish one." ―Father Patrick Desbois

Editor: Nadine Epstein, Editor-in-Chief of Moment Magazine, is the founder and executive director of the Center for Creative Change and founder of the Daniel Pearl Investigative Journalism Initiative. An award-winning journalist and author, she reported for the City News Bureau of Chicago and the Chicago Bureau of the New York Times and covered the U.S.-Mexico border. She was a Knight-Wallace Fellow at the University of Michigan, where she also taught journalism. She is also an artist and the creator of the iShadow Project.

Foreword: Rabbi Lord Jonathan Sacks is the former Chief Rabbi of the United Kingdom. He is the author of more than 25 books, most recently Not in God's Name: Confronting Religious Violence.

Ted Koppel was the anchor and managing editor of ABC News Nightline for 25 years. He is currently a contributor to CBS News Sunday Morning and author of Lights Out.

Nadine Epstein, Editor-in-Chief and CEO of Moment Magazine, is founder and executive director of the Center for Creative Change and founder of the Daniel Pearl Investigative Journalism Initiative. An award-winning journalist, she reported for the City News Bureau of Chicago and the Chicago Bureau of the New York Times and has written numerous publications. She was a Knight-Wallace Fellow at the University of Pennsylvania. Epstein has co-written three books as well as a documentary film shortlisted for an Academy Award. Her artwork and photography are featured in several exhibitions.Ted Koppel is the managing editor for the Discovery Channel. In this role, he anchors and produces long form programming examining major global topics and events for the largest cable network in the United States. He joined the network in January 2006. Ted Koppel is a 42-year veteran of ABC News. Since 1980, he was the anchor and managing editor of ABC News Nightline, one of the most honored broadcasts in television history. As the nation's longest running network daily news anchor, his reporting touched every major news story over the past 25 years. A member of the Broadcasting Hall of Fame, Mr. Koppel has won every major broadcasting award including 40 Emmy Awards, eight George Foster Peabody Awards, 10 duPont-Columbia Awards, and two George Polk Awards. His 10 Overseas Press Club Awards make him the most honored journalist in the Club's history.Rabbi Lord Jonathan Sacks is an international religious leader, philosopher, award-winning author and respected moral voice. Rabbi Sacks was awarded the Templeton Prize in recognition of his exceptional contributions to affirming life's spiritual dimensions. Described by H.R.H. The Prince of Wales as "a light unto this nation" and by former British Prime Minister, Tony Blair as an "intellectual giant" Rabbi Sacks is a frequent contributor to radio, television and the press both in Britain and around the world. Formerly Chief Rabbi of the United Hebrew Congregations of the Commonwealth between 1991 and 2013, Rabbi Sacks has held numerous professorships at several academic institutions and is currently serving as the Ingeborg and Ira Rennert Global Distinguished Professor of New York University. He holds 17 honorary doctorates and is the author of over 30 books.
Loading...
or support indie stores by buying on