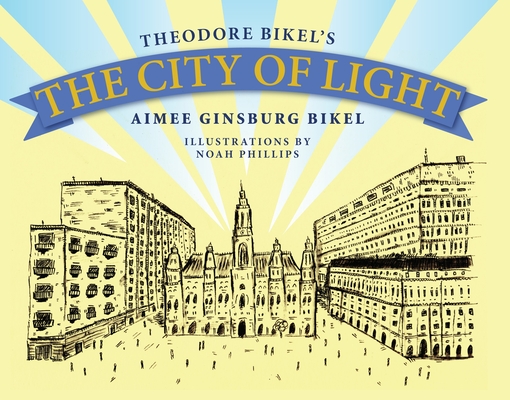 The City of Light

When legendary and beloved actor, singer and activist Theo Bikel wrote a short story, shortly before his passing in 2015, about his happy childhood as a Jewish boy in Vienna--confused by rising anti-Semitism, and ultimately forced to flee after the Nazi takeover--he never could have imagined that Jewish children in the US, at the start of 2020, would have to ask their parents the same questions he had asked his own parents: Why are we hated? Why must I be afraid to be who I am?

In The City of Light , Theodore poignantly recounts moments from his childhood in Vienna-- at first the happy memories of family, sweet cakes, and holidays; and then darker times, when he experienced and witnessed brutal and violent anti-Semitism as Nazi influence grew. Set in Vienna in 1937-38 during Nazi Germany's annexation of Austria, a young Jewish boy witnesses Kristallnacht, "The Night of Broken Glass," and elderly Jews being spat upon and forced to clean the sidewalks with their coats. Once at home in the city, he is ostracized and beaten.

One night, the boy dreams that his favorite Jewish superhero, Judah Maccabee, has arrived to save Vienna's Jews. But when he awakens, there has been no Maccabean rescue. Years pass and the boy, now an old man, returns to Vienna and finds its Jewish community and Temple have been restored. He looks for the eternal light in the Temple and can't find it. Then suddenly it becomes clear to him: "The light was there all the time; it was in my own heart."

This special book, gentle and bittersweet in its tone, also includes a three-page Yiddish glossary, a recipe for Honey Cake from Bikel's grandmother, and sheet music of a little-known Hanukkah song Little Candle Fires with a link to a website where you can hear Theo singing it.

Theodore Bikel's The City of Light is receiving critical acclaim, loved by adults who have followed Bikel for decades, as well as young people struggling to make sense of the acts of hatred and bigotry they are now exposed to daily. Aimee Ginsburg Bikel, Theo's widow and veteran journalist, has added a backstory, several glossaries, and an afterword about an event in Bikel's life with stunning historic significance. Noah Phillips' moving illustrations bring the story to life.

Theodore Bikel was an admired actor, folk singer, musician, composer, unionist, and political activist. He appeared in numerous Hollywood films and in 1959 co-founded the Newport Folk Festival. A seasoned Broadway actor and singer, Bikel originated the role of Captain von Trapp in The Sound of Music and starred as Tevye in the musical Fiddler on the Roof, a role he performed more often than any other actor to date. He was also known for his roles in My Fair Lady, The Defiant Ones, and was a frequent guest star on many popular television series. Bikel received many awards in his life, including an Academy Award Nomination and a star on the Hollywood Walk of Fame. Aimee Ginsburg Bikel is a writer, journalist, public speaker, and community organizer. She served as the senior foreign correspondent in India for Yedioth Ahronoth, Israel's leading daily, for seventeen years. As the director of the Theodore Bikel Legacy Project, she is active in causes that were close to her and Theo's heart: social justice, peace, and Jewish Folk culture.Noah Phillips is a Brooklyn-based writer, illustrator, and social worker. His artwork appeared in magazines, newspapers, and a book of children's stories called The Three Chickens and Five Other Stories.
Loading...
or support indie stores by buying on