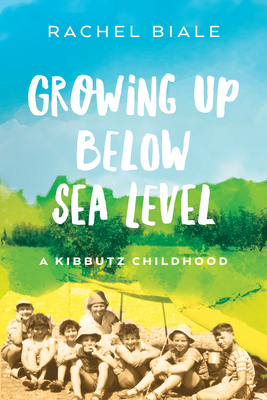 Growing Up Below Sea Level

This beautifully written memoir is composed of linked stories about growing up on a kibbutz in Israel in the 1950s and 60s, when children spent most of their time, from birth on, in a Children's House. This memoir starts with a Prologue drawn from the diaries of Rachel Biale's mother and the letters her parents exchanged while her father served in the British army. With excerpts from these documents, she describes how the long trials and tribulations that encompassed her parents dangerous escape from Eastern Europe to Israel - fleeing from the Nazis from Prague in 1939, five years of dangerous sea voyages, and long internments in British refugee camps. Throughout these ordeals, her parents socialist and Zionist values sustained them and eventually brought them to their kibbutz. The middle and main section of the memoir is devoted to Rachel's growing up as a kibbutz child. While Rachel's parents soon realized that no community can live up to its utopian ideals, Rachel's youth on kibbutz was a robust and buoyant one. Rachel pens 24 beautifully written and engaging stories about her kibbutz childhood -- from earliest memories at age three as part of a children's society, to her army service at age twenty. The stories focus on the world of children, but also offer a window into the lives of the adult kibbutz members, including Holocaust survivors. The book ends with a Postscript--as Rachel revisits her kibbutz and updates the stories of her childhood companions.

Rachel Biale grew up on Kibbutz Kfar Ruppin in Israel. She earned an M.A. in Jewish history at UCLA and an M.S.W. at Yeshiva University. She lives in Berkley, California, where she is a practicing psychotherapist. She is the author of Women and Jewish Law: The Essential Texts, Their History, and Their Relevance Today
Loading...
or support indie stores by buying on