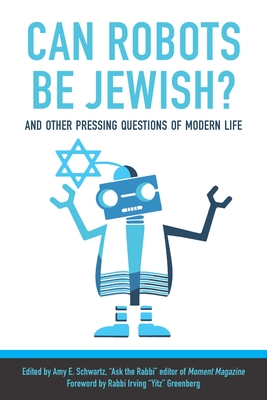 Can Robots Be Jewish? and Other Pressing Questions of Modern Life

A smart, hip and provocative book for anyone interested in the rich diversity of Jewish thought on contemporary questions.

Should we edit our children's genes? Are there things that can't be forgiven? Are Jews still expecting a messiah? Is Judaism good for women? Should Jews strive to be happy? What does Judaism say about love? Are we commanded to vote? Is democracy a Jewish idea? Does Jewish law forbid racism? Is silence consent? What sins should we atone for in our use of social media? When does life begin? Do Jews believe in an afterlife? Can robots be Jewish? In this book, rabbis spanning the range of modern Jewish thought, from Humanist and Reform to Orthodox and beyond, consider these difficult and provocative questions of our time and many others. Sometimes they agree--but not often. You don't have to be a scholar to follow these lively, accessible voices. They offer intelligent discussion of topics both timely and timeless, deep interrogation of Jewish text, law and commentary and an unparalleled look at the breadth, creativity and continued relevance of the Jewish tradition. Editor Amy E. Schwartz provides delightful commentary, celebrating the rabbinic impulse to question every assumption and highlighting the many and sometimes surprising ways ancient texts can speak to us today.

Amy E. Schwartz is Moment Magazine's opinion and book editor, as well as editor of the magazine's popular "Ask the Rabbis" section. Schwartz was a longtime editorial writer and op-ed columnist at The Washington Post, covering education, science and culture. She has also worked at Harper's, The New Republic and The Wilson Quarterly. She is president of the non-denominational Jewish Study Center in Washington, DC and speaks and runs workshops on topics of Jewish commentary, psalms and literature nationwide. Rabbi Irving (Yitz) Greenberg is president of the Hadar Institute's J.J. Greenberg Institute for the Advancement of Jewish Life. His many books include The Jewish Way, Sage Advice: Pirkei Avot and the forthcoming The Triumph of Life. He was chairman of the United States Holocaust Memorial Council and founding president of the National Jewish Center for Learning and Leadership. Rabbi Shira Stutman is the senior rabbi at Sixth & I in Washington, DC. She is rabbi-in-residence for the Jewish Federations of North America and teaches on the faculty of the Wexner Foundation's Heritage Program. She was named one of America's Most Inspiring Rabbis by The Forward, spotlighted as a Woman to Watch by Jewish Women International, and featured as a notable rabbi by Tablet Magazine.
Loading...
or support indie stores by buying on