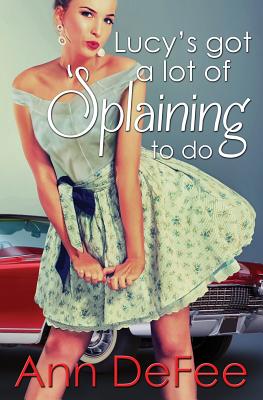 Lucy's Got a Lot of 'Splaining to Do (Paperback)

Attention fans of Monte Python, Mel Brooks and Something About Mary-- Lucy's Got a Lot of 'Splaining to Do is a not-quite-slapstick, full-on-humor story of quirky characters, fantasy, and romance teamed with a huge dollop of magical realism.

In order to win their wins, apprentice angels Coco and Ace have to make sure that Lucy Carson and Jamie Randolph fall in love--a job that requires a ton of imagination and a miracle.

A Las Vegas teacher with a proclivity for all things retro, Lucy's dream is to have a baby. But considering her sex life has been a big fat zero for a very long time, a baby shower seems highly unlikely. In her world, men are pond scum--that's courtesy of her lower than a rattlesnake's bell ex- hubby.

Jamie is a tabloid journalist whose only goal in life is to return to mainstream reporting. But then his life turns topsy-turvy when the neophyte angels convince--read that bribe--him into getting involved in their hare-brained scheme. Lucy turns out to be mighty appealing, but she's strictly off-limits. Getting smote--whatever the heck that means--is not his idea of a good time.

So what will it take for these two very different people to fall in love? How about a miracle called parthenogenesis--fertilization without the benefit of sperm. Far-fetched--yep, but that's why it's miraculous. Set in a Vegas that tourists rarely see, with a cast of eccentric characters--a Transylvanian hit man, a drag queen named Merry Chino Cherry, and a devil's minion who moonlights as a personal injury lawyer--this story has all the elements of a rollicking good time in Sin City.