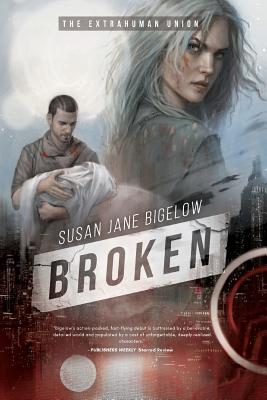 In a post-war, future world, where first contact has been made with intelligent life and humans are colonizing the stars, the nations of Earth have been united under a central government. Extrahumans, those possessing supernatural abilities such as flight and strength, are required by this government to belong to the Union, where they can be trained, monitored, and weaponized. Michael Forward is cursed with the ability to see the future - every possible future - when he gazes into another person's eyes. All he has ever wanted is to escape the grim destiny he sees when he looks in the mirror, but when he is tasked with a mission that will define the course of human history, Michael finds he cannot refuse. Now, he needs the help of a homeless ex-superhero to save a baby who may become the key to humanity's freedom. Broken figured she was done with heroics when she lost the ability to fly and escaped the confinement of the Extrahuman Union. But then the world started to fall apart around her, and a desperate teenage prophet with a baby entered her life, offering her the possibility of redemption and a chance to fly once more. In a time of spreading darkness, when paranoia and oppression reign, can these unlikely allies preserve a small ray of hope for a better, brighter future?

Susan Jane Bigelow is a fiction writer, political columnist, and librarian. She mainly writes science fiction and fantasy novels. Her short fiction has appeared in Strange Horizons, Apex Magazine, Lightspeed Magazine's "Queers Destroy Science Fiction" issue, and the Lamba Award-winning "The Collection: Short Fiction from the Transgender Vanguard," among others. She lives with her wife in northern Connecticut, and is probably currently at the bottom of a pile of cats.
Loading...
or
Not Currently Available for Direct Purchase