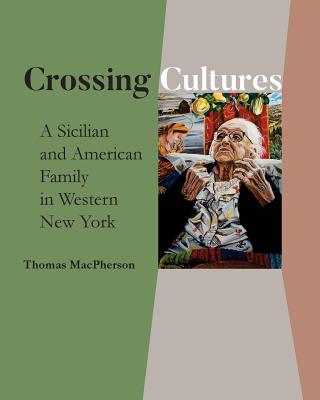 A Sicilian and American Family in Western New York

Crossing Cultures by visual artist Thomas MacPherson is a graphic narrative spanning generations of two immigrant families: one Sicilian and one Scottish. Unlike most Italian immigrants at the time the author's family settled in small town America and struggled for acceptance while confronted with local prejudices. The book tells stories of hardships faced by a family at the boundaries of Italian and American cultures, and examines the intersection with German and Scottish Americans as the family married out of the circle of Sicilian immigrants. Alongside the story of MacPherson's Sicilian family is the MacPherson's journey to assimilation and establishment of a dominant culture to which the new immigrants had to conform, and a look into the science of DNA and how genetic information brings light to the cultures of the two families. These character studies are a compelling blend of oral history, direct observation, family photographs, original egg tempera and oil portrait paintings, and far-reaching historical events that shaped lives in the nineteenth and twentieth centuries.

Thomas MacPherson is an artist and a Professor of Art at SUNY Geneseo. He received a B.A. from the State University of New York-College at Oswego in 1973 and an M.F.A. from the University of South Carolina in 1976. He has been a Professor of Studio Art at the State University of New York-College at Geneseo since 1985 and attained the rank of Professor in 2003. Professor MacPherson has been a practicing artist who has worked in a variety of media including watercolor, egg tempera, oil, all of the printmaking processes and drawing media, including silver point. His watercolors and prints have been widely exhibited in international, national and regional juried exhibitions where they have won awards. He has had solo exhibitions of is work throughout the country including New York City, Buffalo, Syracuse, and Rochester, NY, Cleveland, Ohio, Raleigh, NC, Columbia, SC to name but a few.
Loading...
or support indie stores by buying on