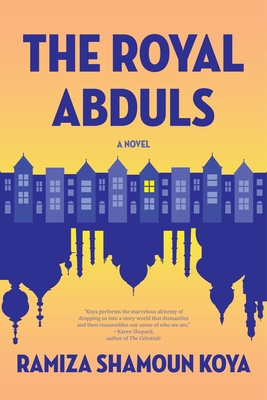 Ramiza Shamoun Koya reveals the devastating cost of anti-Muslim sentiment in The Royal Abduls, her debut novel about a secular Indian-America family. Evolutionary biologist Amina Abdul accepts a post-doc in Washington, DC, choosing her career studying hybrid zones over a faltering West Coast romance. Her brother and sister-in-law welcome her to the city, but their marriage is crumbling, and they soon rely on her to keep their son company. Omar, hungry to understand his roots, fakes an Indian accent, invents a royal past, and peppers his aunt with questions about their cultural heritage. When he brings an ornamental knife to school, his expulsion triggers a downward spiral for his family, even as Amina struggles to find her own place in an America now at war with people who look like her. With The Royal Abduls, Koya ignites the canon of post-9/11 literature with a deft portrait of second-generation American identity.

Ramiza Shamoun Koya has an MFA from Sarah Lawrence College and her fiction and nonfiction has appeared in publications such as Columbia Review, Lumina, Washington Square Review, and Mutha Magazine. She has been a fellow at both MacDowell Colony and Blue Mountain Center. Her father was born in Fiji, her mother in Texas, and she was born in California. She lives with her daughter and two cats.
or support indie stores by buying on
Copyright © 2020 American Booksellers Association