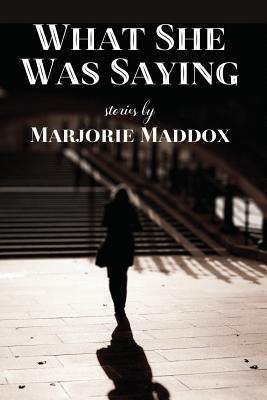 What She Was Saying

In these powerful stories, What She Was Saying softens the already thin line between hope and hopelessness, between perseverance and despair, between what can and cannot be said. Throughout the collection, diverse women startle, question, comfort, and proclaim, compelling readers to confront a company of others: a young woman who mistakes a Jehovah's Witness for her therapist; a mother who shields an ill daughter; an elderly artist who sculpts her adopted family; a daughter of an itinerant preacher who plays her role; a lonely copy editor who fakes bruises; and-in front of many witnesses-a parachutist who jumps to her death. This collection also echoes the historical and literary voices of Rachel Robinson, Nora's daughter in A Doll's House, the wives of famous men named Peter, Lot's daughters, and soldiers Jessica Lynch and Lynndie England. You will hear voices raised in prayer, lowered to whispers, slowed by fear, and silenced by anger. A finalist for the Katherine Anne Porter and Eludia book awards-as well as a semifinalist for Black Lawrence Press's Hudson, Eastern Washington University's Spokane, and Leapfrog Press's book prizes-What She Was Saying gives voice to the lives we all need to hear.

Sage Graduate Fellow of Cornell University (MFA) and Director of Creative Writing and Professor of English at Lock Haven University of Pennsylvania, Marjorie Maddox has published eleven collections of poetry-including True, False, None of the Above (Poiema Poetry Series); Local News from Someplace Else (Wipf and Stock); Weeknights at the Cathedral (WordTech Editions); Transplant, Transport, Transubstantiation (Yellowglen Prize); and Perpendicular As I (Sandstone Book Award)-and over 500 stories, essays, and poems in journals and anthologies. Co-editor with Jerry Wemple of Common Wealth: Contemporary Poets on Pennsylvania (Penn State Press), she also has published the following children's and middle-grade books: A Crossing of Zebras: Animal Packs in Poetry, Rules of the Game: Baseball Poems, A Man Named Branch: The True Story of Baseball's Great Experiment, and Inside Out: Poems on Writing Poems. She is the great grandniece of Branch Rickey, the general manager of the Brooklyn Dodgers who helped break the color barrier by signing Jackie Robinson.
Loading...
or support indie stores by buying on