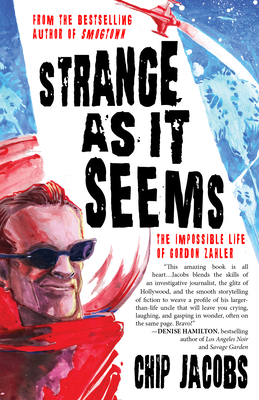 Strange as It Seems

The Impossible Life of Gordon Zahler

Paralyzed from the neck down, Gordon Zahler rose from his deathbed to a fast-talking, Hollywood entrepreneur/idea man who traveled the world, lived hard, married, fantasized about water-skiing and chased his dreams to create one of the largest independent postproduction shops in Hollywood. While this is Jacobs' story about his coming to grips with his deformed uncle, himself and his mother, the silent victim to Gordon's recklessness, Strange As It Seems is also a tip of the hat to the man who turned his back on the notion of I can't.

Chip Jacobs is the author of five other books: Strange As It Seems: The Impossible Life of Gordon Zahler; The Vicodin Thieves: Biopysing L.A.'s Grifters, Gloryhounds and Goliaths; The Ascension of Jerry: Murder, Hitmen and the Making of L.A. Muckraker Jerry Schneiderman; Smogtown: the Lung-Burning History of Pollution in Los Angeles (with William J. Kelly); and the privately issued Black Wednesday Boys. Jacobs' reporting has appeared in the Los Angeles Times, The New York Times, CNN, Bloomberg View, the Daily News of Los Angeles, and LA Weekly, among other outlets. Jacobs, the recipient of numerous writing commendations, lives in Southern California. Visit chipjacobs.com to learn more.
Loading...
or support indie stores by buying on