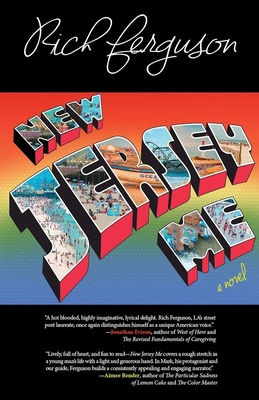 Set amidst the backdrop of the troubled town of Blackwater, New Jersey, a Bruce Lee- and Bruce Springsteen-devoted young hero journeys toward adulthood in this devastating yet intelligent debut novel from poet and musician Rich Ferguson. New Jersey Me explores an ensemble cast of unique characters, including Blackwater's hometown nuclear power plant; a beauty named Baby; Baby's hell-bent-for-prison boyfriend, Terry; a Mary Kay mom high on Vicodin and Bloody Marys; and an old, old tree with a taste for blood. The son of the local police chief, Mark dreams of escaping the small town's conflicting and oppressive codes of manhood. In the meantime, though, Mark lives a boy's life, Blackwater-style: netting fish that have been killed by sudden coldwater emissions from the nuclear plant; kidnapping a chimp from the local circus; selling dirty socks to a local eccentric who may hold the key to Mark's escape; dating a one-legged girl; and observing the increasingly mysterious behavior of his best friend, Jimmy.

Rich Ferguson has performed across the country and has shared the stage with Patti Smith, Wanda Coleman, Exene Cervenka, T. C. Boyle, Loudon Wainwright, Bob Holman, and many other esteemed poets and musicians. He has performed on The Tonight Show, at the REDCAT Theater in Disney Hall, the New York City International Fringe Festival, the Bowery Poetry Club, the South by Southwest Music Festival, the Santa Cruz Poetry Festival, the DocMiami International Film Festival, the Topanga Film Festival, and Stephen Elliott's The Rumpus. He is also a featured performer in the film, What About Me? (the sequel to the double Grammy-nominated film One Giant Leap), featuring Michael Stipe, Michael Franti, k.d. lang, Krishna Das, and others. Ferguson has been published in the Los Angeles Times, has been anthologized by Uphook Press (gape-seed), Smith Magazine (The Moment), TNB Books (The Beautiful Anthology), spotlighted on PBS (Egg: The Art Show), and was a winner in Opium Magazine's Literary Death Match, LA. He is a Pushcart-nominated poet, and also a regular contributor and poetry editor to the online literary journal, The Nervous Breakdown. He lives in Los Angeles.
Loading...
or support indie stores by buying on