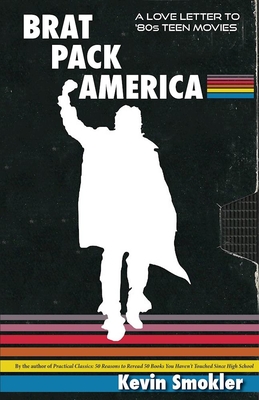 From the fictional towns of Hill Valley, CA, and Shermer, IL, to the beautiful landscapes of the "Goondocks" in Astoria and the "time of your life" dirty dancing resort still alive and well in Lake Lure, NC, '80s teen movies left their mark not just on movie screen and in the hearts of fans, but on the landscape of America itself. Like few other eras in movie history, the '80s teen movies has endured and gotten better with time. In Brat Pack America, Kevin Smokler gives virtual tours of your favorite movies while also picking apart why these locations are so important to these movies. Including interviews with actors, writers, and directors of the era, and chock full of interesting facts about your favorite '80s movies, Brat Pack America is a must for any fan. Smokler went to Goonies Day in Astoria, OR, took a Lost Boys tour of Santa Cruz, CA, and deeply explored every nook and cranny of the movies we all know and love, and it shows.

Kevin Smokler is the author of the essay collection Practical Classics: 50 Reasons to Reread 50 Books you Haven't Touched Since High School (2013), which the Atlantic Wire called truly enjoyable, and the editor of Bookmark Now: Writing in Unreaderly Times, A San Francisco Chronicle Notable Book of 2005. His writing on pop culture has appeared in the LA Times, Salon, BuzzFeed, Vulture, the San Francisco Chronicle and on NPR. In 2013, he was BookRiot's first ever Writer-in-Residence. He can be found on twitter at @weegee. He lives in San Francisco with his wife, cat, and most of MTV's first year on vinyl.
Loading...
or support indie stores by buying on