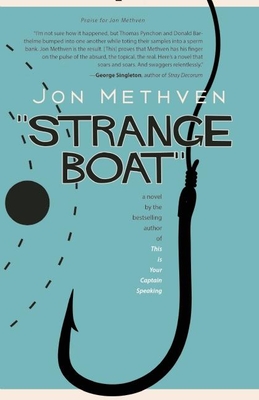 Jon Methven's Strange Boat is the story of Danders Wake, a man raising money to build a new planet. The current world is evolving him out--of his home, his job, his religion, his marriage, his sexuality, even his dream of inventing the world's first pay-for-toilet business, known as Swanktrines. As a member of Manhattan's high society culture, at first the planet fundraiser is conceived by Wake as a means for him to get his hands on his rightful inheritance, which is stuck in escrow so that he does not sink it into his toilet business. But the planet fundraiser is very literally a bigger project, and becomes the grander goal of a man fighting for hope over hopelessness, and a dream for a civilization that refuses to put aside its differences and distractions in order to save itself from . . . well, itself, or perhaps a really big rock heading its way. The story is told in the first person plural, by the "we" members of a government agency known only as Division: Homeland meets The Office. Their job is to sit in vans outside of supposed fraudulent charities that are raising money for dubious activities, like building a planet.

Jon Methven has worked as a paperboy, a dishwasher, a Ponderosa meat cook (everything medium well), a pizza deliverer, a golf course grounds crewman, a barbecue seasoning filter employee, an illegal barbecue seasoning filter employee since he was living in Australia without a work visa at the time, a bartender, a mascot at Yankee Stadium (Mr. Popcorn), a journalist, a taste tester, and a cubicle dweller. He knows things you can only dream of knowing, or can learn if willing to work for minimum wage. His work has appeared at "Timothy McSweeney s Internet Tendency," "n+1," "The New York Times," and "New York" magazine, and he currently writes the Analytically Speaking column that appears Mondays at "The Awl." He lives in New York City with his wife and son."
Loading...
or support indie stores by buying on