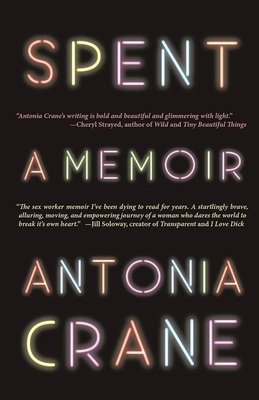 A small town girl leaves her troubled family and starts stripping; which introduces her to a community that keeps her sober and saves her life, but a rollercoaster lifestyle ensues. She gets drugged, does enema shows, and unionizes the club. When she tries to quit and go to graduate school, her mother is diagnosed with terminal cancer. Broke and broken, she returns to sex work, which leads to her arrest and a new resilience. Spent is a memoir about a woman's journey through the sex industry, but it's also a story of family, community, and our constant struggle against loneliness.

Antonia Crane is a performer, 2-time Moth Story Slam Winner and writing instructor in Los Angeles. She has written for The New York Times, The Believer, The Toast, Playboy, Cosmopolitan, Salon.com, The Rumpus, Electric Literature, DAME, The Los Angeles Review, Quartz: The Atlantic Media, Medium.com, Buzzfeed, and dozens of other places. Her fiction and nonfiction prose has appeared alongside writers like Roxane Gay and Stephen Graham Jones (The New Black, edited by Richard Thomas). Her screenplay "The Lusty" (co-written by Transparent director, writer Silas Howard), based on the true story of the exotic dancer's labor union, is a recipient of the San Francisco Film Society/Kenneth Rainin Foundation Grant in screenwriting, 2015. She has appeared on CNN's This is Life With Lisa Ling and has been interviewed on WTF with Marc Maron, and Michael Smerconish on https: //www.siriusxm.com/potus where he compared dancers to Uber drivers. She is at work on an essay collection and a feature film.
Loading...
or support indie stores by buying on