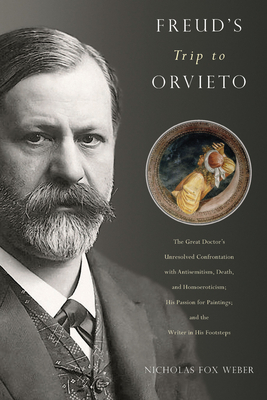 The Great Doctor's Unresolved Confrontation with Antisemitism, Death, and Homoeroticism; His Passion for Paintings; An

An] unusual meditation on sex, death, art, and Jewishness. . . . Weber weaves in musings on his own sexual and religious experiences, creating a freewheeling psychoanalytic document whose approach would surely delight the doctor, even if its conclusions might surprise him. --New Yorker

Freud's Trip to Orvieto is at once profound and wonderfully diverse, and as gripping as any detective story. Nicholas Fox Weber mixes psychoanalysis, art history, and the personal with an intricacy and spiritedness that Freud himself would have admired. --John Banville, author of The Sea and The Blue Guitar

This is an ingenious and fascinating reading of Freud's response to Signorelli's frescoes at Orvieto. It is also a meditation on Jewish identity, and on masculinity, memory, and the power of the image. It is filled with intelligence, wit, and clear-eyed analysis not only of the paintings themselves, but how we respond to them in all their startling sexuality and invigorating beauty. --Colm T ib n, author of Brooklyn and Nora Webster

After a visit to the cathedral at Orvieto in Italy, Sigmund Freud deemed Luca Signorelli's frescoes the greatest artwork he'd ever encountered; yet, a year later, he couldn't recall the artist's name. When the name came back to him, the images he had so admired vanished from his mind's eye. This is known as the Signorelli parapraxis in the annals of Freudian psychoanalysis and is a famous example from Freud's own life of his principle of repressed memory. What was at the bottom of this? There have been many theories on the subject, but Nicholas Fox Weber is the first to study the actual Signorelli frescoes for clues.

What Weber finds in these extraordinary Renaissance paintings provides unexpected insight into this famously confounding incident in Freud's biography. As he sounds the depths of Freud's feelings surrounding his masculinity and Jewish identity, Weber is drawn back into his own past, including his memories of an adolescent obsession with a much older woman.

Freud's Trip to Orvieto is an intellectual mystery with a very personal, intimate dimension. Through rich illustrations, Weber evokes art's singular capacity to provoke, destabilize, and enchant us, as it did Freud, and awaken our deepest memories, fears, and desires.

Nicholas Fox Weber is the director of the Josef and Anni Albers Foundation and author of fourteen books, including biographies of Balthus and Le Corbusier. He has written for the New Yorker, New York Times, Los Angeles Times, Wall Street Journal, Le Monde, ARTnews, Town & Country, and Vogue, among other publications.

Nicholas Fox Weber is the director of the Josef and Anni Albers Foundation and founder and president of Le Korsa, a nonprofit organization devoted to medical care, education, and the arts in isolated villages in rural Senegal. He is the author of fourteen books, including Freud's Trip to Orvieto, biographies of Balthus and Le Corbusier, and numerous exhibition catalogs. His writing has also appeared in the New Yorker, New York Times, Los Angeles Times, Wall Street Journal, Le Monde, ARTnews, Town & Country, and Vogue, among other publications. He is married to the novelist Katharine Weber, has two adult daughters, and lives in Connecticut, Paris, and southwest Ireland.
Loading...
or support indie stores by buying on