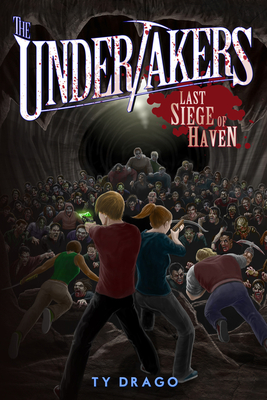 While away on an undercover mission, undertaker Will Ritter has made an unthinkable alliance—with a Corpse! The zombie prince, Robert Dillin, is an alien invader who animates and possesses the bodies of the dead, but unlike the rest of his kind, Dillin isn't evil. In fact, he wants to help. Ritter is willing to take all the help he can get because the Queen of the Dead has learned the location of Haven, the undertakers' secret headquarters, and she is planning a massive and deadly assault. With the last day of the Corpse War finally upon them, Will and his friends find themselves in a desperate race to close the Rift between worlds and forever kill the Corpses. But can they do it before Haven is overrun?

Praise For The Undertakers: Last Siege of Haven…

"Drago writes with an age appropriate tone, but one that is not condescending to older readers – the story is still, after all, a robust exploration of the genesis of a zombie invasion of our world.”  —Daimion, blogger, The Word Zombie on The Undertakers: Rise of the Corpses

“A fun read to spark the interest of reluctant readers and hopefully give them the push they need to start reading!" – Jason, blogger, My Overstuffed Bookshelf on The Undertakers: Rise of the Corpses