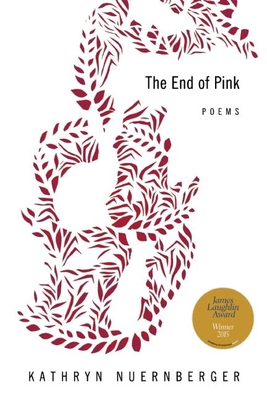 Winner of the 2015 James Laughlin Award, Kathryn Nuernberger's The End of Pink is populated by strange characters--Bat Boy, automatons, taxidermied mermaids, snake oil salesmen, and Benjamin Franklin--all from the annals of science and pseudoscience. Equal parts fact and folklore, these poems look to the marvelous and the weird for a way to understand childbirth, parenthood, sickness, death, and--of course--joy.

Finding myself in a mesmeric orientation,
before me appeared Benjamin Franklin,
who magnetized his French paramours
at dinner parties as an amusing diversion
from his most serious studies of electricity
and the ethereal fire. I like thinking about
how he would have stood on tiptoe to kiss
their buzzing lips and everyone would gasp
and clap for the blue spark between them.
I believe in an honest and forthright manner,
a democracy of plain speech, so I have to
find a way to explain I don't care to have sex
anymore.


Kathryn Nuernberger has lived in various corners of Missouri, Louisiana, Ohio, and Montana. Her first book, Rag & Bone (Elixir Press, 2011), was a love letter to backwoods junk collectors and all of the abandoned cabins in the foothills to the Ozark Mountains. An unapologetic dilettante, she has received research fellowships from the American Antiquarian Society and The Bakken Museum of Electricity in Life to research aspects of the history of science and medicine. She currently lives in Columbia, Missouri, teaches at the University of Central Missouri, and serves as the director of Pleiades Press.

Kathryn Nuernberger is the author of Rag & Bone, which won the 2010 Elixir Press Antivenom Prize. She teaches in the creative writing program at the University of Central Missouri, where she also serves as the director of Pleiades Press. She has received research grants from the American Antiquarian Society and the Bakken Museum of Electricity in Life.
Loading...
or support indie stores by buying on