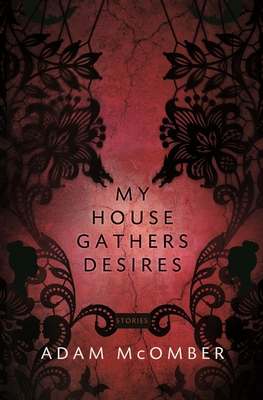 Adam McOmber's lush, hallucinatory stories are both familiar and wholly original. Drawn from the historical record, Biblical lore, fairy tales, science fiction, and nightmares, these offbeat and fantastical works explore gender and sexuality in their darkest and most beautiful manifestations. In the tradition of Angela Carter or Kelly Link, My House Gathers Desires is covertly funny and haunting, seeking fresh ways to consider sexual identity and its relation to history.

In Sodom and Gomorrah, readers encounter a subversive, ecstatic new version of the Old Testament story. In The Re'em, a medieval monk's search for a mythic beast conjures forbidden desire. And in Notes on Inversion, the German psychiatrist Kraft-Ebbing receives a surreal retort to his clinical descriptions of same-sex desire.

From Sodom and Gomorrah:

The strangers then are no longer like two men at all. They have undressed themselves, giving up the pretense of skin and becoming a denser part of the air. We are hungry for them. Ours is a sacred desire that was buried too long in our chests, like some city beneath the sand.

Adam McOmber is the author of The White Forest (Touchstone, 2012) and This New & Poisonous Air (BOA, 2011), from which he had stories nominated for two 2012 Pushcart Prizes. His work has appeared in Conjunctions, Kenyon Review, and Fairy Tale Review. He served as the managing and associate editor of Hotel America at Columbia College Chicago from 2007-2015. He now lives in Los Angeles, CA, where he teaches at Loyola Marymount University.

Adam McOmber is the author of The White Forest (Touchstone, 2012) and This New & Poisonous Air (BOA Editions, 2011). His work has appeared in Conjunctions, Kenyon Review, and Fairy Tale Review. He was the longtime managing and associate editor for the literary magazine Hotel America at Columbia College Chicago before moving to Los Angeles where he now teaches at Loyola Marymount University.
Loading...
or support indie stores by buying on