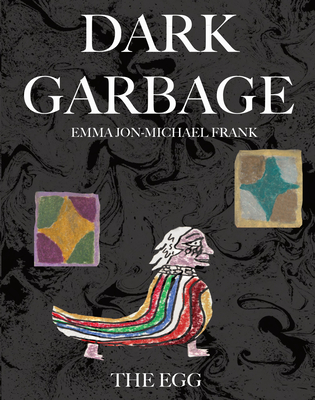 In The Egg, Esther, a body builder, and Mona, a butterfly, embark on a strange voyage for an elusive elixir to restore their lost powers. During their travels, they encounter a wide variety of characters, including a woman who is endlessly working to interpret the shape of the sun, a romantic creature named Poef who can't figure out how to make someone love them, a shapeshifting squire and a mysterious creature who steals their prized cache of essential oils. Frustratingly though, similar to any RPG, each character they meet introduces a new task for them to finish, further distancing them from their initial quest of seeking more elixir. While the world they venture into is often surreal, it's always refreshingly relatable to anyone who struggles with the tragedies and comedies of their own screwball heart.

Emma Jon-Michael Frank is the author of Dark Garbage, Is This The Right Color..., and Things to do Instead of Killing Yourself w/ Tara Booth. Their poetry has appeared in poetry.org and they live in Brooklyn, NY.
Loading...
or support indie stores by buying on