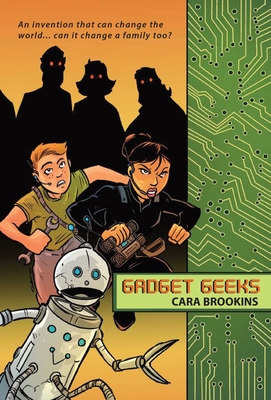 Drew is a computer geek who loves to build things out of electronic scraps that other people throw out. He has developed an amazing new Robot that works on a unique power source — all from parts he found while dumpster diving. Hope is a wealthy Hispanic girl with busy parents. She certainly never planned to dig in trash heaps for robot pieces — but she learns to enjoy it. The two unlikely friends end up on a wild adventure while trying to save their sticky robot from a greedy scientist. Along the way they learn important lessons about family, friendship, and the power of skunk scent.

Cara Brookins is best known for being the mom who built her own house using YouTube tutorials. She has been entertaining, educating, and inspiring audiences with her presentations and workshops since 2004. She’s the author of eight books, including Rise, How a House Built a family, which tells the story of building her 3500 square foot house with the help of her four children by watching YouTube tutorials and googling things like foundation work, plumbing, and gas lines. News of Cara's family story went viral in more than 65 countries and was viewed two billion times. Rise, has now been optioned to become a major motion picture.
Loading...
or support indie stores by buying on