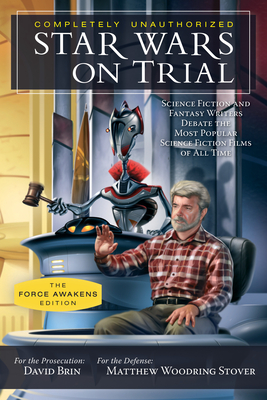 Order in the Court!

Star Wars: the most significant, powerful myth of the twenty-first century or morally bankrupt military fantasy?

Six films. Countless books. $20 billion in revenue. No one can question the financial value or cultural impact of the Star Wars film franchise. But has the impact been for the good?

Supported by a witness list of bestselling science fiction authors, David Brin (for the prosecution) and Matthew Woodring Stover (for the defense) debate these charges and more before delivering their closing statements.

The verdict? That's up to you.

Covering the films from A New Hope to The Force Awakens, Brin and Stover provide new forewords that explore the newest generation of Star Wars films and what JJ Abrams must do to live up to—or redeem—the franchise.

David Brin's 16 novels include Existence, Earth, Startide Rising, and The Postman, which was filmed in 1998. He is recipient of three Hugo Awards and a Nebula. His nonfiction book The Transparent Society won the ALA Freedom of Speech Award.

Matthew Woodring Stover is the author of the film novelization Stars Wars: Revenge of the Sith, as well as Blade of Tyshalle and Star Wars: Shatterpoint.
Loading...
or
Not Currently Available for Direct Purchase