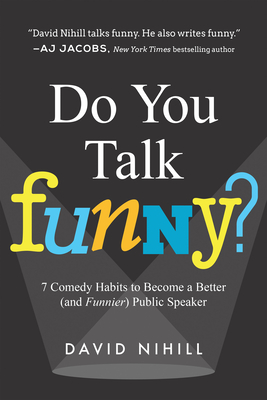 Do You Talk Funny?

7 Comedy Habits to Become a Better (and Funnier) Public Speaker

Public speaking can be terrifying. For David Nihill, the idea of standing in front of an audience was scarier than cliff jumping into a thorny pit of spiders and mothers-in-law. Without a parachute or advanced weaponry. Something had to change. In what doesn't sound like the best plan ever, David decided to overcome his fears by pretending to be an accomplished comedian called "Irish Dave" for one full year, crashing as many comedy clubs, festivals, and shows as possible. One part of the plan was at least logical: he was already Irish and already called Dave. In one year, David went from being deathly afraid of public speaking to hosting a business conference, regularly performing stand-up comedy and winning storytelling competitions in front of packed houses. And he did it by learning from some of the best public speakers in the world: stand-up comedians. Do You Talk Funny?: 7 Comedy Habits to Become a Better (and Funnier) Public Speaker shows how the key principles of stand-up comedy can be applied to your speaking engagements and presentations to make you funnier, more interesting, and better looking. (Or at least two of the three.) Whether you are preparing for a business presentation, giving a wedding toast, defending your thesis, raising money from investors, or simply want to take on something you're afraid of, this book will take you from sweaty to stage-ready. You'll learn how to:
- Craft a story and content that your audience will want to listen to
- Find the funniest parts of your material and how to get to them faster
- Deal with stage fright
- Master the two most important parts of your performance: timing and delivery Ten percent of the author's proceeds from this book will go to Arash Bayatmakou via Help Hope Live until he is fully back on his feet and thereafter to one of the many facing the same challenges after suffering a severe spinal cord injury.

From Dublin, Ireland, David Nihill is a bestselling author and the Founder of FunnyBizz Conference. His work has been read by over 1 million people and featured in Inc., Lifehacker, The Huffington Post, Fast Company, Entrepreneur, Forbes, NPR, The Irish Independent, TV3, Newstalk, and The Irish Times. "One of the best speaking coaches out there" according to Forbes.com, David's program with over 34,000 students has been featured by Prezi as one of the best training courses for presenters. A sought after international business and TEDx speaker, David has also performed standup comedy and was the winner of the prestigious San Francisco International Comedy Competition (previous finalists include Robin Williams, Dana Carvey, and Ellen DeGeneres). As a lecturer, he has taught at Stanford Graduate Business School, UC Berkeley, University of Oxford, and University College Dublin. A graduate of the UCD Michael Smurfit Graduate Business School, he now calls San Francisco home when immigration officials permit, and was named on the 2017 Irish America 100 List, which recognizes the accomplishments of the best and the brightest Irish-American and Irish-born leaders. About the Editor Nils Parker is the editor of multiple New York Times, Amazon, and Wall Street Journal bestselling books, including I Hope They Serve Beer in Hell and Assholes Finish First by Tucker Max, Trust Me, I'm Lying and The Obstacle Is The Way by Ryan Holiday, and Choose Yourself by James Altucher. He loves comedy, Cal football, and his wife. Not necessarily in that order.
Loading...
or support indie stores by buying on
(This book is on backorder)