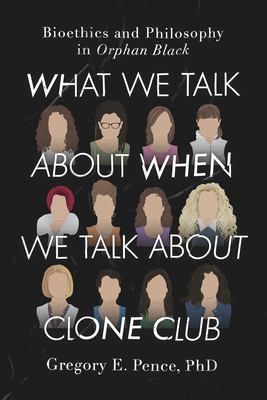 Bioethics and Philosophy in Orphan Black

What is the real-world history and science of human cloning, and does Orphan Black get it right? Can you "own" a person—even a cloned one? How can Sarah Manning be straight, Cosima gay, and Tony trans? Cult hit sci-fi show Orphan Black doesn't just entertain—it also raises fascinating questions about human cloning, its ethics, and its impact on personal identity.

In What We Talk About When We Talk About Clone Club: Bioethics and Philosophy in Orphan Black, prominent bioethicist Gregory E. Pence violates Clone Club's first rule to take us deeper into the show and its connections to the real world, including:

Widespread myths about human clones (and Orphan Black's rejection of them)
Our ugly history of eugenics
The ethics of human experimentation, by way of Projects Castor and Leda
What we can learn about clones and identity from twin studies and tensions among Orphan Black's clone "sisters"
Kendall Malone and other genetic anomalies
The brave new world of genetic enhancement and clonal dynasties, and how Helena and Kira Manning fit in

In the process, What We Talk About When We Talk About Clone Club reveals why Orphan Black is some of today's most engaging and thought-provoking television.

"In this timely book, Professor Gregory Pence fights fire with fire, transforming Orphan Black from hit series into bioethics and philosophy text. His thoughtful analysis of cloning fact and fiction draws upon a wealth of scientific and sociological research. Professors and students alike will enjoy this rich and entertaining book."
—Kerry Lynn Macintosh, professor of law, Santa Clara University

"Medical ethics expert and science fiction aficionado Gregory Pence has written a wonderful book that is both a captivating read as well as highly educational. . . . I highly recommend this for inclusion in your personal dinner table conversation starter kit, student reading materials or simply as a book to read on your next long flight or at the beach. Buy it, you won't regret it!"
—Udo Schuklenk, PhD, professor of philosophy and Ontario Research Chair in Bioethics

Gregory E. Pence, PhD, is an international expert on the ethics of human cloning. A year after the birth of the lamb Dolly in 1997, he wrote Who's Afraid of Human Cloning? and in 2004, Cloning After Dolly: Who's Still Afraid?. In 2000, he was the lone bioethicist to testify before Congress and the California Senate against bills that would have criminalized human cloning. He has talked about cloning humans at endowed lectures in Brazil, Switzerland, Australia, and on many North American campuses.

He has taught for 40 years at the University of Alabama at Birmingham (UAB), where he Chairs Philosophy. For 34 years, he taught a required course in Bioethics at UAB to 160 medical students, a course that discussed human cloning. His teams have won three national championships in college Ethics Bowls and he has won the two top teaching awards at UAB. His Medical Ethics has run seven editions over 25 years with McGraw-Hill. He has published over 60 op-ed essays in the New York Times, Birmingham News, The Wall Street Journal, The Los Angeles Times, and Newsweek, including many on cloning humans.
Loading...
or support indie stores by buying on