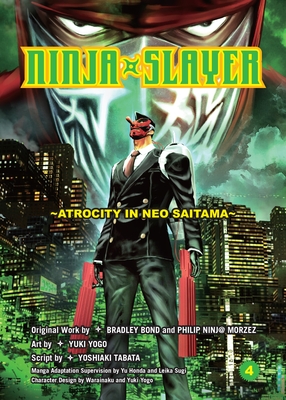 A rogue ninja fights criminals and other ninjas to maintain order in this lawless region of Japan. The fourth volume of Ninja Slayer covers the five-chapter-long story “Atrocity in Neo-Saitama.”

By day, the bustling Tokyo suburb of Neo-Saitama is a relatively sleepy community, home to hundreds of thousands of Tokyo's laborers and white-collar staffers. But by night, before all those people return to their homes, Neo-Saitama turns into a world of neon and vice, a megalopolis of debauchery, the home of a syndicate of many murderous, power-wielding ninjas whose names strike fear across Japan.