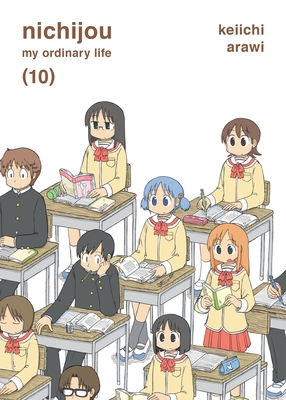 a game of musical chairs takes a sharp turn. nano pulls out all the stops in a battle against a fry thief. a bizarre body-swap situation occurs in the shinonome household. yuuko displays a talent for naming things. we get a glimpse of mio’s dream job, as everyone writes a letter to their future selves...

Keiichi Arawi (1977-) is a professional comic artist and illustrator. Originally from Gunma, Japan, he was raised in the city of Maebashi. By the time he was 19 he entered the world of comics drawing short stories for Media Factory's Comic Flapper (My Neighbor Seki, 7 Billion Needles). While his first series KazeMachi was short-lived it caught the attention of one of the bigger publishers in Japan, Kadokawa Publishing. His short "Nichijou" won Kadokawa's 22nd ACE Award for New Artists and by November 2006 Nichijou was regularly serialized in Kadokawa's flagship magazine Shonen Ace. Nichijou has since then sold more than a million copies and has seen cartoon and video game adaptations.
Loading...
or support indie stores by buying on