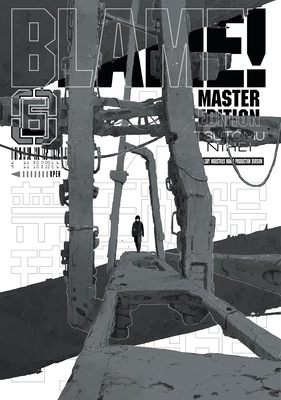 In this final installment, Kyrii, still searching for the Net Terminal Gene, traces the steps of Cibo, reincarnated as a Level 9 Safeguard, and Sanakan, now a representative of the Administration. As Sanakan guides Cibo to a safe place where her sphere can develop in peace, Cibo is captured by the Silicon Life. Sanakan contacts Kyrii requesting his help in rescuing Cibo, because in her current form she may hold the key to saving the city. Sanakan risks everything in the battle against the Silicon Life. Kyrii arrives at a critical moment, and continues his endless journey while carrying the embodiment of hope for a different future beyond the outer limits of the city...

The BLAME! franchise was so well received worldwide, that it inspired an animated mini-series and eventually drew the attention of Marvel Comics in the US. Nihei would later go on to draw Wolverine (X-Men) and HALO comics for Marvel to great fanfare. An architectural student, Nihei's early work were mainly wordless, relying on visuals and backgrounds to tell their stories. Now, his works are deeply rooted in hard science-fiction, as was seen in the multiple NY Times Bestselling books HALO: The Graphic Novel (published by Marvel Comics) and BIOmega (published by Viz Media).
Loading...
or support indie stores by buying on