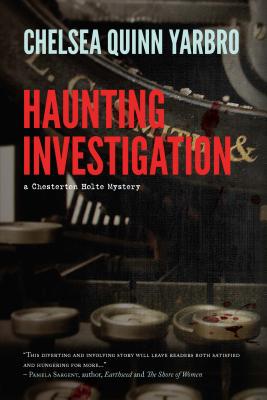 Spring 1924. The world has clawed its way back from the ravages of WWI and the Spanish Flu pandemic. The 20's are beginning to roar. Poppy Thornton lives with her Aunt Jo and her excitable cat Maestro in upper-crust Philadelphia. Poppy is determined to make a name for herself as a serious crime reporter, but is stuck reporting on garden parties and ladies' fashion. Then one day her editor assigns her to collect background information on the suicide of a prominent businessman. She soon discovers it was actually a murder... but her surprising source for this information is the ghost of a man killed alongside her father during the Great War. Even if she dared tell anyone, who would believe it? Together Poppy and her "gentleman haunt" follow the trail of a string of murders. But as their investigation narrows in on an all-too-familiar suspect, Poppy becomes a target herself-- and wonders if her ghost of a partner will appear in time to keep her from joining him in the after-life.

Chelsea Quinn Yarbro has published over ninety novels and nonfiction works and more than seventy pieces of short fiction. She's known for her bestselling series of historical horror novels featuring the 4000 year-old vampire Count Saint-Germain.She's been awarded a literary knighthood by the Transylvanian Society of Dracula, a Grand Master award by the World Horror Association, was the first woman enrolled as a Living Legend by the International Horror Guild, and has received two Lifetime Achievement Awards-- from the Horror Writers Association and from the World Fantasy Association in 2014.Yarbro lives in the San Francisco Bay Area with the Gang of Two (her irrepressible cats Butterscotch and Crumpet).
Loading...
or
Not Currently Available for Direct Purchase