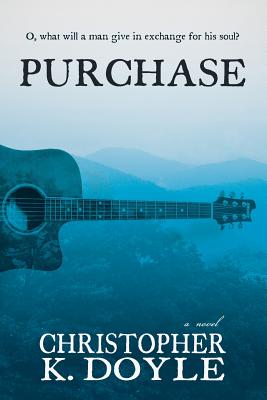 O, what will a man give in exchange for his soul?

An unlikely friendship between a black fugitive from the law and a white fugitive from an abusive home changes their lives, their fortunes, and the foundations of country music. When Isaiah and A.D. are forced to flee their jobs as janitors at the Peabody Conservatory in Baltimore, they embark on a search for the songs and the men and women who have created them or kept them alive through trial and tribulation. As they delve deeper and deeper into the peaks and valleys of the Blue Ridge Mountains, their fame and wealth grows even as Isaiah’s family haunts him and A.D.’s obsession with “the names” of the musicians they seek threatens to destroy them both.

"In every soul there is a story to be told, and in every story there is a song to be heard. Musical, passionate, and introspective, Purchase is a novel about the strange necessity of art and living, and the undefined line in between, which makes both pursuits worthwhile." — Yiyun Li, author of Dear Friend, from My Life I Write to You in Your Life and Kinder Than Solitude

"Christopher K. Doyle’s Purchase is a lyrical narrative with a picaresque bent and big ideas. It’s about roots music and racism and desperate love and so much more, set vividly in 1930s America. You’ll find adventure here and plenty to think about. It’s a great debut." — Ron Tanner, author of Missile Paradise

Christopher Kritwise Doyle grew up in Brunswick, Maryland, a small town nestled on the banks of the Potomac River and Blue Ridge Mountains. After receiving his MFA from the University of Baltimore, he has written about the origins of country music, an embattled elementary school principal in urban America, and the C&O Canal. He lives in Baltimore with his wife, daughter, and bluetick coonhound all in a cramped row house.