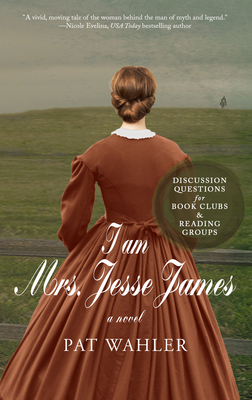 I am Mrs. Jesse James

A penny for a promise will change her life forever.

For Jesse James, the war will never be over. For Zee Mimms, the war is only the beginning.

The long, bloody Civil War is finally at an end when Zee Mimms, the dutiful daughter of a Missouri preacher, is tasked with nursing her cousin, Jesse James, back to health after he suffers a near-fatal wound. During Jesse's long convalescence, the couple falls in love, but Jesse's resentment against the Federals runs deep. He has scores to settle. For him, the war will never be over.

Zee is torn between deferring to her parents’ wishes and marrying for security or marrying for love and accepting the hard realities of life with an outlaw—living under an assumed name and forever on the run. For her, the choice she makes means the war is only beginning.

Pat Wahler is an award-winning writer with fifteen stories in the popular Chicken Soup for the Soul series. Her work also appears in Sasee Magazine,Storyteller Magazine, Reader's Digest, Kansas City Voices, and other publications. A former children's librarian, Pat believes in the power of storytelling to teach and nurture children. Her debut novel, I Am Mrs. Jesse James, is available from Blank Slate Press, an imprint of the Amphorae Publishing Group. Find out more about Pat at www.patwahler.com