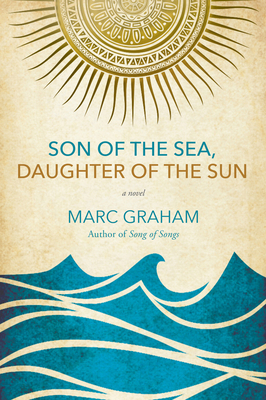 Son of the Sea, Daughter of the Sun (Paperback)

A shipwrecked prince on a foreign shore and a young princess coming into her powers battle dark forces that would destroy her kingdom and their love.  Nine hundred years before Columbus, a sailor with a mystical map and a vision of a glorious destiny is shipwrecked on the far side of the world. A prince of Visigothic Spain, Iudila finds his match in Chakin, daughter of a Mayan king. Can love span the gulf between them, or will they be cast apart by their different gods—or by the dark shaman who desires Chakin for himself?

Marc Graham studied mechanical engineering at Rice University in Texas, but has been writing since his first attempt at science fiction penned when he was ten. From there, he graduated to knock-off political thrillers, all safely locked away to protect the public, before settling on historical fiction. His first novel, Of Ashes and Dust, was published in March 2017. He has won numerous writing contests including, the National Writers Assocation Manuscript Contest (Of Ashes and Dust), the Paul Gillette Memorial Writing Contest - Historical (Of Ashes and Dust, Song of Songs), and the Colorado Gold Writing Contest - Mainstream (Prince of the West, coming from Blank Slate Press in Fall 2019). He lives in Colorado on the front range of the Rocky Mountains, and in addition to writing, he is an actor, narrator, speaker, story coach, shamanic practitioner, and whisky afficianado (Macallan 18, one ice cube). When not on stage or studio, in a pub, or bound to his computer, he can be found hiking with his wife and their Greater Swiss Mountain Dog.


Praise For Son of the Sea, Daughter of the Sun…

“A rousing plunge into the power politics of the ancient world, peopled with legendary characters.” — Margaret George, New York Times bestselling author of The Memoir of Cleopatra

“With lyrical prose and a keen sense of time and place, Marc Graham sweeps us into this dramatic and unknown tale of rivalry, passion, and the quest for freedom behind the Biblical myth. Song of Songs resonates with historical truth, but never sacrifices the hearts of the fabled women who actually lived it.” — C.W. Gortner, author of The Romanov Empress

“A stirring novel of love, lust and vengeance, restoring the lost feminine voice to one of the great Biblical tales. You will never think of the Queen of Sheba the same way again.” — Kamran Pasha, author of Mother of the Believers and Shadow of the Swords

“Marc Graham regales us with a masterful retelling of a story we believe we already know. His prose breathes life into ancient characters and serves as a bridge across the gulf of history so we may experience their all too relatable motivations.” — Michael F. Haspil, author of Graveyard Shift

"A princess and a pirate uncover secrets from the past in Marc Graham’s historical romance Son of the Sea, Daughter of the Sun. Kidnapped by Mediterranean pirates, young Iudila grows into a brave fighter and a strong sailor. An ocean away, Lady Chakin, a priestess and the princess of the prosperous kingdom of Shukpi, is groomed by her greedy uncle to usher in a new age of war and bloodshed. Their worlds collide when Iudila, driven by a prophecy, journeys to Shukpi to join their bloodlines and plant the seeds of a better world. Set in the seventh century, the story travels through a bevy of historical locations, including the colorful, clamoring port city of Tingis and Mayan temples filled with intricate carvings and atmospheric passageways. Each is rendered in strong, evocative detail. The inclusion of gritty details, like the proliferation of rats and lice onboard ships, adds a sense of realism to the narrative. The novel is divided into three parts. The first, which relates Iudila’s back story, seethes with exciting boat chases and brutal fight scenes. The second part, Chakin’s back story, keeps a slow, tense pace as the young girl slowly but steadily deserts her peace-loving father in favor of her bloodthirsty uncle. Part three unites the two lovers even as political and mystical forces gather to tear them apart. Dark themes, including mutilation, rape, and pedophilia, are present throughout. The depiction of Iudila, a white man, as a godlike hero to the people of Shukpi is disconcerting. The theological ties binding Iudila and Chakin, and the liberties taken with historical accuracy to make those ties possible, is sometimes distracting. However, extensive historical notes and a bibliography explain where fact becomes fiction and why such changes were made, making the adaptations easier to understand and appreciate. Both heroes and villains display ruthless behavior. This cruelty makes the villains, especially Chakin’s uncle Tok-Ekh, all the more despicable. In some cases, the heroes are manipulated into violence; in others, they commit merciless acts of their own accord, making it difficult to sympathize with them. The book’s structure forces the romance to take a backseat to historical and adventure aspects; the would-be lovers don’t meet until over halfway through the narrative. The pair falls in love almost at first sight and realizes they are destined to be together; little time is spent on developing their relationship. The novel is better approached as historical fiction; its world building is stunning, its twists are devastating, and there’s the appealing promise of more to come. Son of the Sea, Daughter of the Sun is an exciting historical romance of epic proportions." — Eileen Gonzalez, Foreword Reviews
or support indie stores by buying on
Copyright © 2020 American Booksellers Association