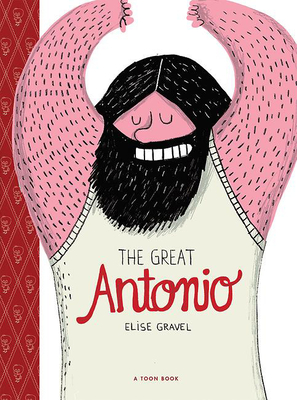 What made the Great Antonio so great? He weighed as much as a horse He once wrestled a bear. He could devour twenty-five roasted chickens at one sitting. In this whimsical book, beloved author and illustrator Elise Gravel tells the true story of Antonio Barichievich, the larger-than-life Montreal strongman who had muscles as big as his heart.

In kindergarten Elise was popular because she could draw princesses with long, spiral curls. Then in high school, girls asked her to draw their dream guys, and she became very talented at drawing muscles and chest hair, which came in handy for this book. One of Elise's favorite authors is Roald Dahl. He got her interested in unusual people and animals--anyone who is strange, different, or funny. In her hometown of Montreal, everyone knew and loved the great Antonio, the gentle giant who lived outside the donut shop. He claimed to have been one of the strongest men in the world and to be able to talk to aliens with his braids. After his death, it was revealed that many of Antonio's wild stories were true: he had a letter from President Bill Clinton and photos of himself with celebrities like Liza Minnelli, Sophia Loren, and Johnny Carson.
Loading...
or support indie stores by buying on