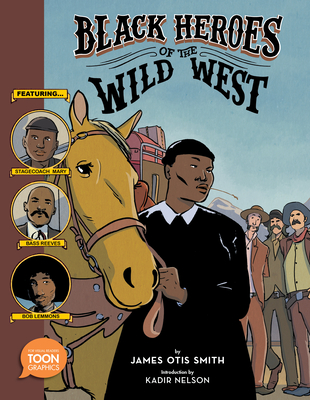 Exploring American history and finding diversity at its roots
This graphic novel by JAMES OTIS SMITH celebrates the extraordinary true tales of three black heroes who took control of their destinies and stood up for their communities in the Old West. Born into slavery in Tennessee, Mary Fields became famous as "Stagecoach Mary," a cigar-chomping, card playing coach driver who never missed a delivery. Bass Reeves, the first black Deputy US Marshal west of the Mississippi, was one of the wiliest lawmen in the territories, bringing thousands of outlaws to justice with his smarts. Bob Lemmons lived to be 99 years old and was so good with horses that the wild mustangs on the plains of Texas took him for one of their own.
A Junior Library Guild Gold Standard Selection
From the introduction by KADIR NELSON, winner of the 2020 Caldecott Award: "Black Heroes of the Wild West is a brilliant and entertaining offering. Through sharp and evocative storytelling in the exciting medium of comics, lesser-known African American historical figures will be introduced to new generations of readers."

James Otis Smith is the illustrator of Showtime at the Apollo: The Epic Tale of Harlem's Legendary Theatre, and a multi-talented artist whose work spans illustration, comics, motion graphics, and video. This is his first book as both author and illustrator. Smith lives in Brooklyn, New York. Kadir Nelson is the author or illustrator of more than thirty children's books including The Undefeated, written by Kwame Alexander, which received the 2020 Caldecott Medal, the Coretta Scott King Award, and a Newbery Honor. In his introduction to Black Heroes of the Wild West, Nelson writes, "It's time that we hear every American's story: from every background and creed, we've all worked together to weave the grand tapestry of America."
or support indie stores by buying on
Copyright © 2020 American Booksellers Association