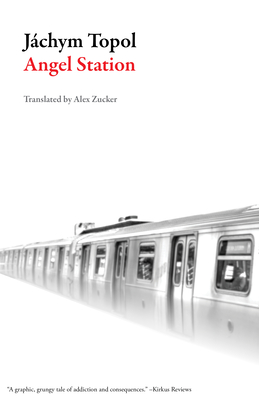 Jachym Topol is the most-translated Czech author of his generation, lauded for his imaginative storytelling and his inventive use of language. Melding fiction and documentary, with a dash of black humor on the side, he zeroes in on the agonies and injustices of the totalitarian past, in his own country and throughout Central and Eastern Europe.

Angel Station takes its title from the bustling Metro stop in the Prague district of Sm chov. Until the gentrification of the late 1990s, it was a rough-and-tumble, working-class neighborhood with a sizeable Roma and Vietnamese population. Topol's novel, in sparse yet poetic language--agilely brought into English by the author's longtime translator Alex Zucker--weaves together the brutal and disturbing fates of an addict, a shopkeeper, and a religious fanatic as they each follow the path they hope will lead them to serenity: drugs, money, and faith.