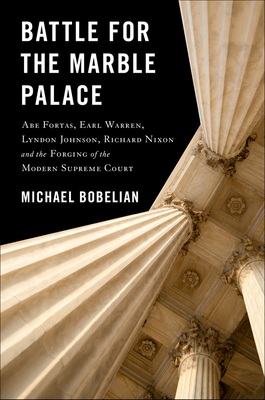 Battle For The Marble Palace

1968 was a particularly tumultuous year in American history. The escalating war in Vietnam, the riots during the Democratic Convention, and the assassinations of Martin Luther King Jr. and Robert Kennedy left a scar on the national consciousness. But one great battle that took place during this time is barely recalled. The nomination of Abe Fortas for Chief Justice of the Supreme Court launched an all-out cultural war that would determine the course of major court cases for years to come. Award-winning judicial journalist and Supreme Court reporter Michael Bobelian brings us right into the halls where this fierce battle raged, pitting Lyndon Johnson and the Democratic Party against Richard Nixon and the GOP in a fight that ended in the defamation of Fortas, the first Jew ever nominated for the highest judicial office. Written in vivid detail, the narrative unfolds in a series of dramatic vignettes, from the landmark ruling of Brown vs. Board of Education to the chaos on the floor of the Democratic Convention. Readers are given a behind the scenes look at the camaraderie among the retiring Chief Justice Earl Warren, Lyndon Johnson, and Fortas—and will witness, with them, the rise of Richard Nixon as the fate of the liberal court is decided.

Praise For Battle For The Marble Palace: Abe Fortas, Earl Warren, Lyndon Johnson, Richard Nixon and the Forging of the Modern Supreme Court…

"This book ranks among the very best chronicles of the politics of judicial selection." —Mark Obbie, Former Executive Editor, American Lawyer magazine & Co-Founder, Syracuse University’s Institute for the Study of the Judiciary, Politics, and the Media


"Battle for the Marble Palace is a brilliant evocation of a critical moment in the Court’s history, combining political biography, legal analysis, and insider reporting that will be sure to resonate with the next Supreme Court nomination." —Thomas Brom, Former Senior Editor, California Lawyer magazine

"Beautifully crafted and rooted in deep research, Battle For The Marble Palace conveys the characters, context, and drama of an era whose shadow we have never escaped. I learned something I didn't know on almost every page." —Allen Matusow, author, The Unraveling of America: A History of Liberalism in the 1960s

"Battle for the Marble Palace will appeal to… everyone interested in a better understanding of how our cantankerous nomination process came to be." —John Kyle Day, author of The Southern Manifesto: Massive Resistance and the Fight to Preserve Segregation

"If you don’t like what’s become of the process, a pox belongs on both political parties. This thoughtful book explains why." —David A. Kaplan,
author of The most Dangerous Branch: Inside the Supreme Court's Assault on the Constitution

"Battle for the Marble Palace tells a very important story with fresh insight and perspective about a time when a sinkhole first developed at the busy intersection of politics and the judiciary." —Stephen Wermiel, Former Supreme Court reporter at the Wall Street Journal, co-author, Justice Brennan: Liberal Champion

"Michael Bobelian has done yeoman’s work in using primary and secondary sources to reveal the varied motives and diverse actors involved in this important step in the transformation of judicial appointments into vicious political contests." —Ian Drake, Law & Liberty

Michael Bobelian is an award-winning author, lawyer, and journalist. He is a contributing writer at Forbes.com and has also written for the Los Angeles Times, Reuters, Legal Affairs magazine, and elsewhere.
Loading...
or support indie stores by buying on