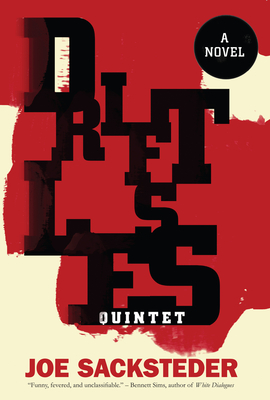 When high school hockey phenom (and gifted pianist/composer) Colton Vogler transfers to the town of Driftless to play out his senior year, he's one step closer to a career as a professional goalie. But a violent hazing incident, an increasingly erratic host family, and the mystery surrounding a car accident that paralyzed his predecessor on the team lead Colton to gradually suspect that things in Driftless are not as they seem—and that, rather than serving as assets, his youth, intellect, and physical talent have put him in grave danger.

"As a writer, Joe Sacksteder is always surprising me. With his language, his leaps of faith, his deep and confounding characters. Driftless Quintet is a novel full of these surprises, but it’s so, so much more. It’s thrilling, terrifying and heartwarming and human, a book that will reward multiple readings and ponderings until Sacksteder surprises us again." —Jared Yates Sexton, Author of The Man They Wanted Me To Be: Toxic Masculinity and a Crisis of Our Own Making


"An admirably strange and inventive debut novel. Driftless Quintet is about hockey the way End Zone was about football. What the pigskin was for DeLillo, the hockey puck is for Sacksteder: a petri dish full of American paranoia and poison, perfect for measuring our cultures of belligerence, masculinity, sports psychosis, conspiracy theorizing, white supremacy, and empire. Funny, fevered, and unclassifiable, Driftless Quintet perfects the hybrid genre it invents—coming-of-age, small-town conspiracy, postmodern hockey noir—and introduces Sacksteder, like his gumshoe goalie Colton Vogler, as a talent worth scouting." — Bennett Sims, Author of White Dialogues

"Eerie and brilliant, Joe Sacksteder's Driftless Quintet captures young maleness on the razor edge between cruelty and creativity. This sinister Midwestern wormhole will immerse and surprise you at every turn, from the hockey rink to the end of the world." — Henry Hoke, Author of Genevieves

"In Joe Sacksteder’s Driftless Quintet, a high school hockey star settles in a mysterious new town for his senior year. Hoping to further his career as a hockey goalie, Colton transfers north to a school in Driftless, Wisconsin. There, he is hosted by the Rentschler family of NHL legend. While in Driftless, Colton falls for Charlie, who seems out of reach from the beginning, and whom he learns is involved with his host brother, Ben. Colton is the focus in the book; other characters are scant presences who function to move Colton’s story forward. They are filtered through his realistic internal perspective, which reveals more about him than what he says in conversation. This is apparent in an exchange with a girl from his class; she tries to engage him in conversation, but Colton’s focus remains on Charlie, and his tone is disinterested. Because he’s a musician, too, Colton’s story is punctuated by references to classical music. Pieces are described in a way that heightens suspense, as when Colton’s thoughts drift to Charlie and Ben during a piano performance that becomes more and more tense. At first seeming like an ordinary town, Driftless’s apparent normalcy crumbles after unsettling encounters with Colton’s host family. Then Colton learns that the accident that resulted in Shane, the former goalie’s, incapacitation may not have been an accident at all. Colton, too, could be headed toward a tragedy, and it might be too late for him to leave. The story moves at a swift pace, and ambiguity surrounds its progression. Every scene escalates the sense of foreboding: Colton passes by the hockey rink and sees a display photo of Driftless players who are now dead; Shane’s photo is included, even though he’s still alive. Towards the end, past secrets come to light; when Colton is violently attacked, he comes to understand the real reason he was invited to Driftless. A sports-centered coming-of-age story, Driftless Quintet is suspenseful and complex." — Edith Wairimu​, Foreword Reviews​

"Make/Shift is an experience—uncanny, revelatory, transcendent. To read it is akin to walking along a path through new territory, in the dark, with a flashlight. However, it's just as satisfying as it is mystifying, just as full of dislocation as it is of the firmest grounding. Make/Shift arrives just in time to frighten, to change, and to save us." — Laura Kasischke, author of Space, In Chains​

"Subversive, provocative, and piercingly poignant, the disparate fictions of Make/Shift deliver the reader to the mysteries of inchoate grief, the hilarity of subliminal messaging, the ecstasies of transgression, and the magical possibilities of a parallel universe." — Melanie Rae Thon, author of Silence And Song​

Joe Sacksteder is a PhD candidate at the University of Utah, where he's also the managing editor of Quarterly West. His debut story collection, Make/Shift, is available from Sarabande Books, and his album of sound collages, Fugitive Traces, is available from Punctum Books. His writing has appeared in such publications as Ninth Letter, Salt Hill, Denver Quarterly, The Rumpus, and The Literary Review. He was recently named Director of Creative Writing at Interlochen Arts Academy in northern Michigan.
Loading...
or
Not Currently Available for Direct Purchase