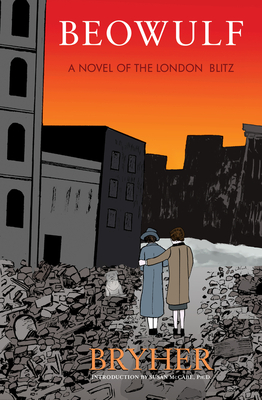 A Novel of the London Blitz

Eighty years ago, the city of London became the target of a relentless bombing campaign by Nazi Germany during WWII that has come to be known as the Blitz. From the period between 1940-1945, over 20,000 Londoners were killed and half a million lost their homes. Bryher, who lived through a good part of those years in London, has provided us with an indelible portrait of day-to-day life from a variety of voices and perspectives from its regular citizens, humanizing the political backdrop of war with their pluck, humor, endurance, and courage. Her two female protagonists who own and operate the local teashop,The Warming Pan, become the heroes of the novel as they work to provide food and hospitality to the embattled community. Certain to appeal to all fans of WWII fiction, Beowulf is an unforgettable reminder of what it was like during that crucial time in Britain's and the world's history.

Praise For Beowulf: A Novel of the London Blitz…

"Reading the book today, it feels urgent and absorbing.... Beowulf makes for especially timely reading right now, proof of a surprising number of similarities, parallels, and echoes between the past and the present." —Lucy Scholes, The Paris Review

Bryher, nee Winifred Ellerman, was an author, philanthropist, and activist who published several historical novels. She was the longtime companion of the poet H.D. (Hilda Doolittle) with whom she lived in London during the war years. Susan McCabe, Ph.D. is a professor of English Literature at USC and author of the upcoming dual biography, H.D. AND BRYHER: A Modernist Romance (Oxford University Press).
Loading...
or
Not Currently Available for Direct Purchase