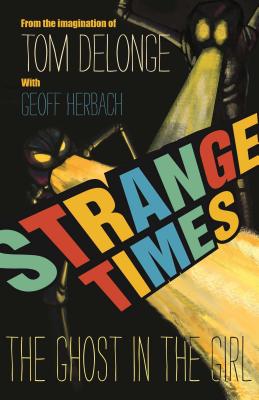 The Ghost In The Girl

From the imagination of blink-182’s award-winning author Tom DeLonge, the Strange Times crew first debuted in the graphic novel Strange Times: The Curse of Superstition Mountain. Now teamed-up with Geoff Herbach, also an award-winning author of the Felton Reinstein Trilogy, DeLonge tells the hilarious and haunting adventure that originally forced five outcast jerks to band together or give up the ghost.

Charlie Wilkins has it all. Pitcher on the baseball team, point guard on the basketball team, good jock friends and girls who just love him. Then his U.S. Air Force dad goes M.I.A. during a secret mission and Charlie falls into darkness. He quits basketball, pushes away his old friends who all seem so stupid. He stops talking. Nobody knows what he’s going through, because the government has forbidden the family from disclosing Dad’s predicament. Charlie turns into a loner, until an Earth Science assignment forces him to join a new, messed-up team.

Wiz has a brain for science, a love for steampunk, and a total disgust for most human beings. Heavy-set, picked-on Riley has a home life Harry Potter wouldn’t trade for. Mouse and Mattheson are skateboard slackers with a keen interest in tacos and in building a model volcano that looks like a butt. With zero chemistry between them, Charlie can’t see how he’s going to pass this class. Will he be stuck, suffering, in eighth grade forever?

The earth shifts. It seems impossible. A ghost girl reaches out to Charlie through the terrified skater boys. She’s being stalked by a vengeful spirit that shares a past with Charlie’s family. It soon becomes clear that the spirit is coming for him. He has to save the ghost girl and save himself. His only hope? The nerd Wiz, the loser Riley, the skaters Mouse and Mattheson who want to hook-up with the girl. But, seriously, she’s a ghost.

Tom DeLonge is an award-winning producer, author, platinum recording artist, researcher and entrepreneur from San Diego, CA.  Today Tom, with his company To The Stars, produces original content that aims to inspire a newfound appreciation of the profound, yet unresolved, mysteries involving science and the universe through entertainment directly informed by science.  His first multi-media franchise Love, told the story of an isolated astronaut on the International Space Station and included a double album by his band Angels And Airwaves with the feature film premiering in 600 theatres across the United States.  His next franchise Poet Anderson was inspired by a dream study conducted at Stanford University and spanned an award-winning short film, a chart-topping album, acclaimed comic book series, graphic novel and a YA science fiction novel co-written with NY Times Bestselling author Suzanne Young.  Most recently he is working on Sekret Machines which spans both sci-fi fiction and nonfiction thesis informed by unprecedented access at the highest level of the government and science to uncover information about the UFO phenomenon with renowned authors AJ Hartley and Peter Levenda.  His Sekret Machines work has won him the 2017 UFO Researcher of the Year award.
Loading...
or support indie stores by buying on