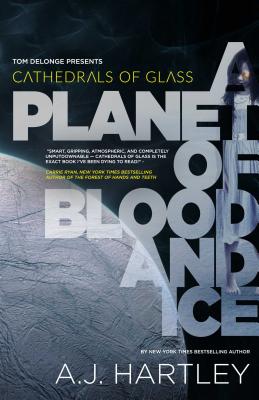 A Planet of Blood and Ice

“Deviance is unattractive and jeopardizes all we hold dear…”

Ten teenagers broke behavioral law. Sentenced to be reeducated on the moon of Jerem, they were placed in stasis on the automated ship Phetteron for their six day journey. They never reached their destination.

“Home looks after its own…”

Thrown off course by a computer malfunction, the Phetteron is damaged in an asteroid belt and crash lands on the uninhabited ice planet of Valkrys. Having spent their lives in temperature controlled environments, consuming nutrient supplements, and interacting with people mostly through the infonet, the teens are unprepared to depend on each other to face the harsh, hostile, and hellish landscape. Home will send a rescue party long before their meager supplies run out.

“No contrary positions are viable…”

Sola was a roamer. She wandered the city after curfew, reveling in the freedom of being disconnected from the techgrid and embracing the joy of physical activity. For those actions, Home declared her deviant. But on Valkrys, her deviance is an asset that may be the teens’ only hope for survival.

As Sola explores their strange new world, she discovers that she and her shipmates are linked by something more frightening than their subversive behaviors—and uncovers a truth about the planet the authorities at Home wanted buried.

Valkrys is not uninhabited. And what lives there is predatory…

A.J. Hartley is the New York Times and USA Today bestselling author of books in a variety of genres and was born and raised in Lancashire in Northern England,. AJ’s stories are driven by mystery and danger but also reflect his abiding interest in archaeology, history, and foreign travel. As an English major at Manchester University he took extra classes in Egyptology and got a job working on a Bronze Age site just outside Jerusalem. Since then, life has taken him to many places around the world, and though he always leaned more towards the literary than to the strictly historical, his fascination with the past continues unabated. He has an M.A. and Ph.D. in English literature from Boston University, and he is the Russell Robinson Professor of Shakespeare Studies at the University of North Carolina, Charlotte, and works as a scholar, screenwriter, dramaturg and theatre director.

Tom DeLonge is an award-winning producer, author, platinum recording artist, researcher and entrepreneur from San Diego, CA.  Today Tom, with his company To The Stars, produces original content that aims to inspire a newfound appreciation of the profound, yet unresolved, mysteries involving science and the universe through entertainment directly informed by science.  His first multi-media franchise Love, told the story of an isolated astronaut on the International Space Station and included a double album by his band Angels And Airwaves with the feature film premiering in 600 theatres across the United States.  His next franchise Poet Anderson was inspired by a dream study conducted at Stanford University and spanned an award-winning short film, a chart-topping album, acclaimed comic book series, graphic novel and a YA science fiction novel co-written with NY Times Bestselling author Suzanne Young.  Most recently he is working on Sekret Machines which spans both sci-fi fiction and nonfiction thesis informed by unprecedented access at the highest level of the government and science to uncover information about the UFO phenomenon with renowned authors AJ Hartley and Peter Levenda.  His Sekret Machines work has won him the 2017 UFO Researcher of the Year award.
Loading...
or
Not Currently Available for Direct Purchase