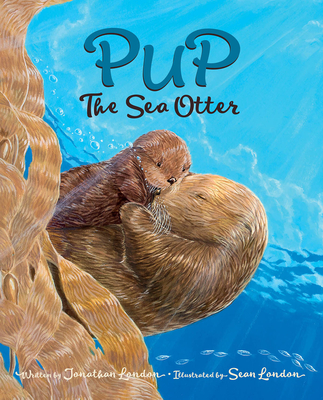 Watch Pup grow from his birth to first dive and from rambunctious play with other sea otter pups to a frightening encounter with a predator.

Bestselling author Jonathan London tells Pup's story in sparse, poetic text with vivid vocabulary while luminous illustrations by London's son, Sean London, bring the adorable Pup and his loving mother to life within the swirling sea around them.

London's newest creation in his picture book collection about baby animals (including The Seasons of Little Wolf, Little Puffin's First Flight, and Honey Paw and Lightfoot) will entertain children with a combination of learning and fun. An author's note at the end shares fascinating facts about this popular keystone species.

Jonathan London has written more than one hundred picture books for children, many of them about wildlife. He is also the author of the popular Froggy series. He lives with his wife in northern California. www.jonathan-london.net. Sean London received a BFA from CalArts in Character Animation and has done animation for Disney. He has also collaborated with his father on the Aaron's Wilderness series: Desolation Canyon, Bella Bella, and Grizzly Peak.
or
Not Currently Available for Direct Purchase