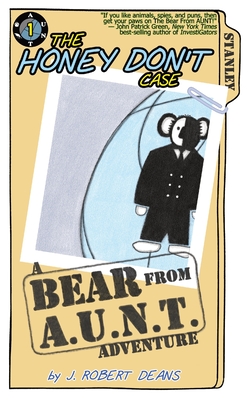 A Bear From AUNT Adventure

THE BEAR FROM AUNT is an illustrated fiction series for mid-grade readers featuring the super-koala-spy Stanley. Stanley as the "Bear From AUNT" with his fellow A.U.N.T. agents work to keep the world safe from evil geniuses...and evil not-so-geniuses. THE HONEY DON'T CASE is an expanded version of the original 2015 volume with an expanded story and all new artwork In THE HONEY DON'T CASE, we are introduced to AUNT's senior agent, Stanley. In this first memoir Stanley tells us all about AUNT and how he met his longtime partner, Marco. He also tells the reader about their first case together, investigating the dwindling supply of the world's honey. A honey shortage is not the only problem, however - as the world's honeybees are disappearing, too Stanley and Marco have to learn to work together while trying to learn what is causing the honey shortage. Is it a simple case of climate problems? Is it a farming mishap gone horribly awry? Or, is it something more nefarious? The search sends them across the world and into their own backyard - but can Stanley and Marco figure out the solution while also figuring each other out? More importantly, can Stanley and his colleagues at AUNT save the day? Find out in THE HONEY DON'T CASE

As long as the Koala is a threatened/endangered species, a portion of the proceeds from all DFP/Crass Fed Kids books featuring Stanley will be donated to global charities working to save Koala and their habitats.