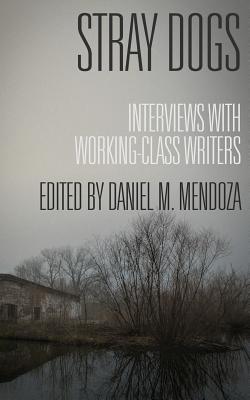 Stray Dogs: Interviews with Working-Class Writers delivers a portrait of contemporary working class authors in America. Editor Daniel M. Mendoza engages with "some of the best in contemporary literary fiction." These one-on-one interviews seek to uncover how each writer has developed their working-class aesthetic. A young writer himself, Mendoza encourages the author's to discuss their craft, their upbringing, their socio-political beliefs, as well as the state of contemporary literature. Stray Dogs: Interviews with Working-Class Writers, is an insightful study of an often overlooked literary genre. Rolando Hinojosa-Smith on the novel in America:
"...to show a world as seen by the writer, as experienced (with certain changes) by the writer and to hold whatever it is that the writer holds as his truths..." Richard Burgin on the self and society:
"In terms of real metaphysical truth, however, there's been a shift since Dickens and more people are less sure than ever about the origins and purpose of the universe." Eric Miles Williamson on style:
"I believe that there is no personal style; writers don't come out original like Athena from Zeus's head. Everybody steals or learns a writer's style and does the opposite. The best writers are the best anthologists..." Stephen Gutierrez on the reader:
"I hope that they experience being alive as another person in another time and place and learn (again) that we're all pretty much the same facing the same shit, sometimes nobly, sometimes ignobly..." Ron Cooper on what writer's read:
"I have sought out work by authors who write about real people, people who know what true struggles are, people who often do not know how they are going to pay their bills."