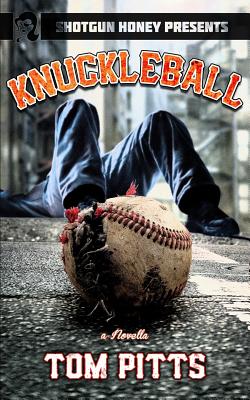 Hugh Patterson is an old-school cop and die-hard Giants fan rooted in the San Francisco Mission District. When he's struck down in the line of duty, the whole city is aghast. But Oscar Flores, a 15-year old Latino boy obsessed with baseball, witnesses the gruesome crime and has a plan to assuage the city's grief and satisfy his own vision of justice. Against the backdrop of a weekend long series with the Dodgers, the gripping crime story plays out against the city's brightest monuments and darkest alleys.

Tom Pitts received his education on the streets of San Francisco. He remains there, working, writing, and trying to survive. The new edition of his novel, HUSTLE, is out now from Down & Out Books. His novellas, Piggyback (Snubnose Press) and Knuckleball (Shotgun Honey), are available now. His new novel, American Static, will be released by Down & Out Books in June 2017 Find links to more of his work at: TomPittsAuthor.com
or support indie stores by buying on