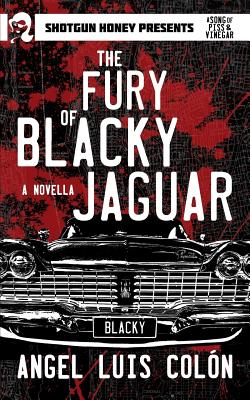 The Fury of Blacky Jaguar

Blacky Jaguar ex-IRA hard man, devoted greaser, and overall hooligan, is furious. Someone's made off with Polly, his 1959 Plymouth Fury, and there's not much that can stop him from getting her back. It doesn t take him to long to get a name, Osito, the Little Bear. This career bastard has Polly in his clutches, and Blacky doesn't have long until she's a memory. The sudden burst of righteous violence gets the attention of Special Agent Linda Chen, FBI pariah and Blacky's former flame. Linda's out to get her man before he burns down half the Bronx and her superiors get the collar. All roads will lead our heroes to an unassuming house in one of the worst parts of the South Bronx, where fists and bullets will surely fly, but maybe, just maybe, Blacky will find a better reason to fight than a car. The Fury of Blacky Jaguar is the story of friends, enemies, and one sweet ass ride.

Angel Luis Colon's fiction has appeared in multiple print and web publications like All Due Respect, Thuglit, Big Pulp, and Spinetingler. He reviews mystery/suspense novels for My Bookish Ways, an award-winning book blogging and review site, and is an editor for Shotgun Honey, a flash-fiction website focused on publishing the best in noir, hard-boiled, and crime. He's been nominated for the Derringer Award and has won a writing contest or two. Keep up with him at his site, angeluiscolon.com or follow him on Twitter @GoshDarnMyLife
Loading...
or support indie stores by buying on