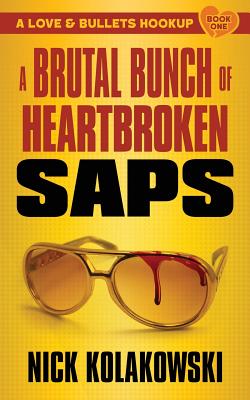 A Brutal Bunch of Heartbroken Saps

Bill is a hustler's hustler with a taste for the high life. He pulls off big scores for one of New York City's more vicious gangs...until he suddenly grows a conscience. However, living the clean life takes a whole lot of money, and so Bill decides to steal a fortune from his employer before skipping town. With a bag of cash in the trunk of his car, Bill heads west, ready for a new life. But all that money makes him a tempting target for some bad people he meets on the road-and if that wasn't dangerous enough, some old friends are close behind him, and they intend to make a trophy of his head. Pursued by crooked cops, dimwitted bouncers, and a wisecracking assassin in the midst of a midlife crisis, Bill will need to be a quick study in the way of the gun if he wants to survive his own getaway. Who knew that an honest attempt at redemption could rack up a body count like this? A Brutal Bunch of Heartbroken Saps is a gonzo noir journey into obsession, violence, and the power of love.