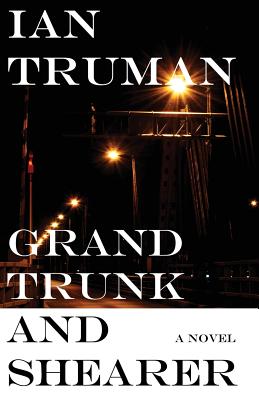 When Cillian Kennedy's body was fished out of the canal, no one believed his death was due to natural causes.

But when the police wrote it off as an accidental death, four of his friends and family roamed the city in the search of any clue that may lead to the killer.

Answers were found down dead end roads, on the edge of the industrial harbour front, in an abandoned building now a crack den, through obscure networks of anti-racist skinheads, the racist Heritage Front, former gay bashers, the flailing Irish mob and the Mohawk MMA circuit.

Featuring some of Montreal's most notorious neighbourhoods, and told in a uniquely gritty raconteur voice, Grand Trunk and Shearer offers more than the typical run-of-the-mill mystery novel. At a crossroads between noir, private eye and literary fiction, it is a book that will please those who have come to ask more of the genre with profound characterization, down to earth style, minimalist setting, believable violence and flawless dialogue.

Praise for GRAND TRUNK AND SHEARER:

"D'Arcy Kennedy's search for his brother's killer is a gut-wrenching trip into a world of people left behind by gentrification, forgotten by changing politics and trying to hang onto what little family they have left. It's authentic, it's raw, and it's got heart. It's a trip worth taking." --John McFetridge, author of A Little More Free