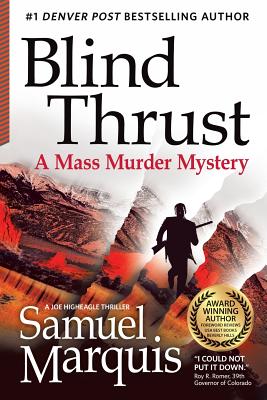 Horrific earthquakes are devastating the Front Range between Denver and Colorado Springs in an area long believed to be seismically quiescent. They are being generated by ruptures along cryptic, mysterious, deeply buried thrust faults (blind thrusts) that, unlike many faults, do not break the surface during large-scale seismic events. Somehow the cause of the unusual earthquakes must be unraveled and the cataclysms stopped before they result in more carnage and devastation. But are they the result of natural tectonic adjustments, hydro-fracking, conventional subsurface sequestering, or clandestine operations? Environmental Geologist Joe Higheagle is on a mission to find out the answer. But he soon finds himself in a deadly duel of wits against powerful forces. With his team of techie sleuths, Higheagle goes toe to toe against his adversaries while grappling to collect, analyze, and leverage the scientific data needed to prove his case. But at every turn he is thwarted by his shadowy enemy and, with the cataclysms worsening, he may not have enough on his side to solve the mystery and save Colorado from more devastation. Can he solve the enigma of the earthquakes and gather enough evidence to stop those responsible? Will the tremors continue to wreak death and mayhem across the Front Range? Or will Higheagle and his outgunned team be defeated and ultimately crushed by their adversaries? If the earthquakes are not stopped, thousands more will perish and more towns and homes will be destroyed, leaving countless injured and homeless as well as untold financial damage across the Front Range. But can the resourceful Higheagle and his team stop those responsible? In the end, all they can do is try.